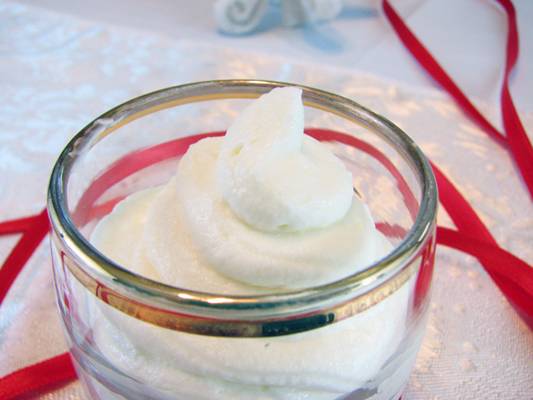 This mousse was originally made to be a part of a different article, nothing more than a part of a larger recipe, but once it was made I had to put the mousse itself in the place it deserves to be.  Firmly in the spotlight.

Let me start by saying this:  I am not a huge white chocolate fan.  Generally speaking I’d rather be going for dark chocolate, or better, chocolate toffee. This recipe may have changed my mind.

This mousse is light, delicate, fluffy, airy, silky, velvety and other adjectives I just can’t come up with at the moment.  Basically it’s like eating a slightly whipped-cream flavored cloud, but with the flavor intensified by a factor of 100.  I could sit and just spoon down a cup of this mousse without ever trying hard, though a full cup might be a little much for anyone.

The mousse is simplicity in itself to make and could be used for any number of absolutely decadent desserts.  Drop a dollop on a pie the next time you were craving whipped cream, use it as a substitute for butter cream in a cake recipe, the filling for a pie or tart, or as a classic mousse.  My personal favorite way to eat it is drizzled with a bit of fruit compote and a spoon ;-)

What I would have done differently had I Thought of it at the time:

I think I’m going to have to try this with other flavorings.  It would probably be great with amaretto or Irish whiskey (White Chocolate Irish Cream Mousse, anyone?)  Do you have any ideas?