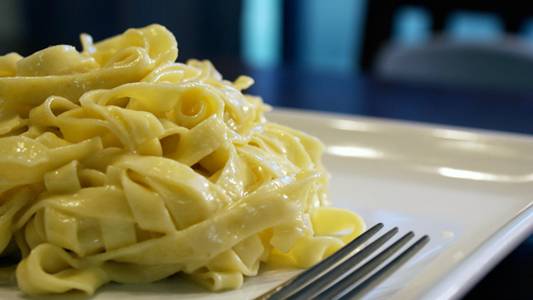 Fettuccine Alfredo is one of Italy’s most wondrous exports. A perfect pairing of rich, creamy sauce and perfectly cooked pasta that serves equally well as a main dish or as a side to nearly anything you feel like serving with it.  It’s complex yet simple,  filling and decadent.  What could be more wonderful?

If you won’t believe me, would you believe Saveur magazine? Their May issue features an article by Tod Coleman titled “The Real Alfredo”, which details the history and creation of this iconic dish from its birth just after the turn of the century.  Alfredo, it seems, created the dish for his wife, who had lost her appetite after giving birth to their son.  His modified Fettuccine al Burro featured far more butter than the original, a combination that “…neither his wife or his customers could resist.”

While most versions I’ve seen are fairly complex and require a fair bit of attention to detail, the original Fettuccine Alfredo has just four ingredients and takes mere minutes to make, but results in a dish far more complex and wondrous than any Alfredo I’ve ever eaten in an Italian restaurant anywhere… Ever. And I’ve eaten a lot.

So please be so kind as to take a moment to meet the real Alfredo.  You’ll never think of this dish the same way again.  But you may find you eat a lot more of it.

The original recipe for what might just be the perfect pasta dish. (Adapted from a recipe in Saveur magazine, may 2009)

This recipe absolutely requires that you use freshly grated Parmesan cheese. The stuff in the green shaker tin isn't going to work here at all. Look for wedges of Parmesan in the deli o specialty cheese section in most supermarkets.

Aside from the fact that I used fresh pasta because it’s what I had on hand, I will NEVER change this recipe.  It’s too simple, too perfect.  It is sheer and utter decadence and should not be adulterated in any way.

It’s spoiled me from ever eating Alfredo in a restaurant again… But I’m not complaining.