S.O.S. (Shit on a Shingle) – A Reimagined Comfort Food Classic 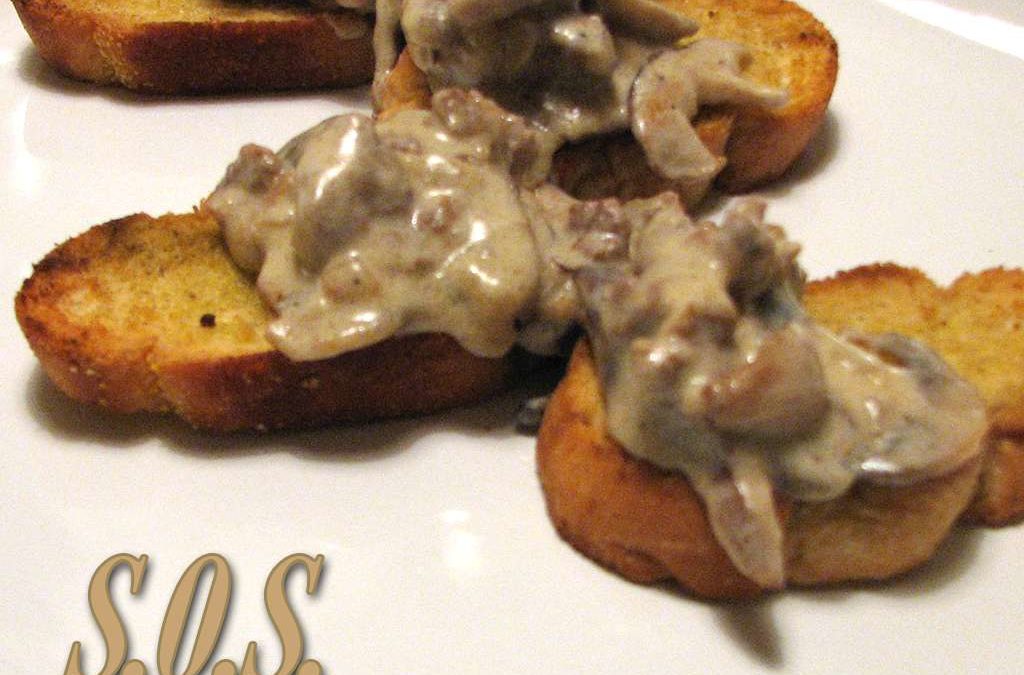 *NOTE: This is not the classic or original version of S.O.S. This is a reimagined version. If you are looking for the original recipe for creamed chipped beef on toast (Also known as S.O.S., Shit on a shingle, stuff on toast, or by any of its other very colorful names, please follow this link to The Classic Version of Creamed Chipped Beef on Toast. Thanks!)

It’s time to begin the comfort food makeovers!  I mentioned that I would be doing so this year, and I’m not about to let Y’all down.

I know I can’t be the only one who grew up eating S.O.S., also known as Creamed Beef on Toast, or Shit on a Shingle.  As a kid it was one of my favorite dishes, since it was only made occasionally. (I don’t think my mother really enjoyed it all that much, but my father did.)

I’m not sure if my liking for this dish stemmed more from the fact that I could usually manage to slip in one curse word without getting in too much trouble, or the fact that anything that included beef and cream is something I find strangely wondrous.

My mother’s version of SOS was always made using cream of celery soup (Yep, condensed, from a can.) Two pounds of hamburger, and maybe an onion or two tossed in for good measure.  Most of the recipes I’ve seen that use canned soup call for cream of mushroom, but my mother had issues digesting them, so they were never a staple in my childhood home.

The original recipe calls for neither celery or mushrooms, so I may have drifted completely off course with this update/remake, but I don’t think so.

I toyed with the idea of naming this dish “Chier sur un bardeau”, but why rename Shit on a shingle to the same thing in a different language?  It is what it is, a food staple that caught on in the U.S. (And England as well, I believe.) during the first and second world wars and the great depression.

Inexpensive, filling and at least somewhat tasty.  It provided a lot of sustenance for very little money, and gave the family something hot and satisfying to share around their table. In that respect, Shit on a shingle (Or just S.O.S., if you aren’t comfortable tossing four-letter words around your dinner table) is comfort food at its very best.

For me, it’s a reminder of a different era, time spent with my mother and sister in the kitchen, and the good and bad times that followed.   In short, even though this is an updated version of the original, it takes me home.  It’s also quite messy, which makes for giggles at my current table, where my wife and I try not to get too much of the sauce on our faces!

A new twist on the classic recipe for S.O.S. (Also known as Shit on a Shingle)

I think a little Pecorino  Romano sprinkled over the top would be a nice addition, as would a bit of fresh parsley mixed in the sauce at the last minute for freshness.

Other S.O.S. Recipes, because you can never have enough Shit on a Shingle