Creamed Chipped Beef on Toast (A.K.A. Shit on a Shingle ): classic comfort food 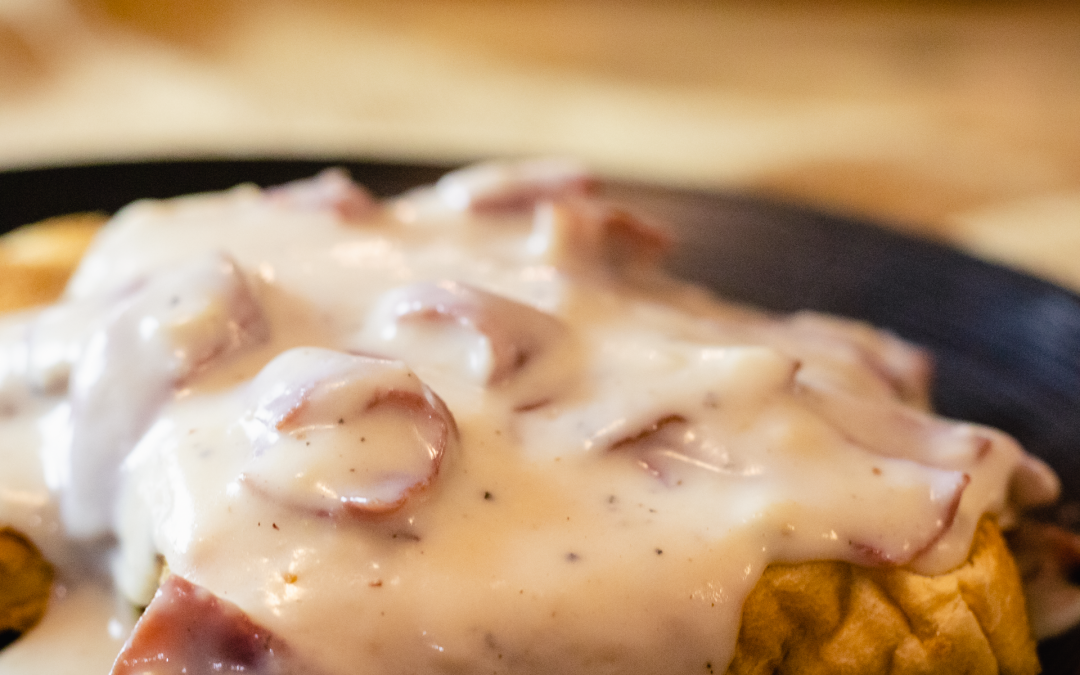 Welcome to part one of a deep-dive into a true American classic food, Creamed Chipped Beef on Toast. (Also known as S.O.S., Same old Stuff, Same old Shit, Shit on a Shingle, and Stew on a Shingle.) There are a lot of variations on this dish. And I mean a LOT. But today we’re going to start with my take on the recipe that started it all.

The first known printing of this recipe is from the 1910 Manual for Army Cooks. The table of contents lists it as “Stewed chipped beef, with cream sauce, served on toast.” the recipe itself is simply titled “Beef, chipped (for 60 men).“

Y’all, it doesn’t get any simpler than this. We’re talking about a recipe designed to feed 60 hungry, tired soldiers. With shelf-stable pantry goods. In battlefield conditions.

This is pretty simple stuff, right? All ingredients are things an army cook would have had on hand (or at least should have had on hand) in 1910 (Except maybe the parsley, unless it was dried.). This recipe stretches rations and fills bellies. Even if it is a little… Lackluster, shall we say?

Why do they call it “Shit on a shingle?”

Well… You have to remember that this recipe is more of a guideline than it is a set of strict rules. (As are most recipes of the time.) Not all provisions arrive when they should, or are what you expect. Cooks have to make substitutions, even today, especially in wartime.

You also have to consider the fact that not all provisions in the field in 1910 were of top quality. Or of good quality. Or of any quality at all. (You ate what you could get at times.) And of course, there’s the issue that not all army cooks are very good cooks (and not all even wanted to be cooks) at all…

Sometimes the S.O.S. tasted like… Well… You get the idea.

Eventually, anything that had some kind of meat slathered in creamed gravy became the “shit“, and the toast they served it on was the “shingle.” It was a meal some soldiers groaned about, but others quite liked it. When those soldiers came home at the end of the First and Second World Wars, they brought a craving for creamed chipped beef on toast with them.

I, for one, am very thankful they did.

The original recipe for S.O.S. is obviously a bit much for most people. It’s made to feed a platoon, not a family. It’s also using an ingredient list from over a century ago. Let’s assume you’re feeding four to six people, not forty to sixty.

We’re also going to adjust this a little to use ingredients most people will have available in their kitchens. ( I’m skipping the condensed milk mixed with beef stock for plain whole milk.) But feel free to play with the recipe until you come up with a version that makes you happy!

First – A bit of discussion on dried, or “chipped” beef:

We can assume that the version of dried beef used in the original recipe is at least similar to what is available today. Or at least I can’t find any reference to something completely different. Though I doubt you’ll find a 15-pound container of the stuff available.

More likely, you’ll be able to find a 2.25-ounce jar of dried beef at your local grocer, or you can get a 3-pack of dried beef from Amazon.

They look a bit like pringles… Only beefier. And saltier. With a texture a lot like fruit leather. It’s kinda cool, actually.

Did you notice the line in the instructions that say to scald the beef if it’s very salty? WEll. I’m here to tell you right from the get-go that it is. It’s Very. VERY salty.

You don’t have to scald your chipped beef, but you’re definitely going to want to soak it in fresh, cold water for a bit before cooking. You might even want to change out the water once or twice.

I didn’t soak my chipped beef. Trust me, that was a mistake.

Anyway, before you soak and rinse your chipped beef (And you will, because you are a lot smarter than I am), chop it into bite-sized pieces. It doesn’t have to be perfect and pretty, but it will definitely help with the end result.

If this is the first time you’ve made S.O.S., it’s not going to look like you’ve got a lot of meat here. But trust me, a 2.5-ounce jar will easily make enough for 4 people, and maybe 6. No need to open a second container unless you’re serving a large group, or you’re extremely hungry.

Right. Now that you’ve rinsed and chopped your beef (Or you can chop it and then rinse it. The order honestly doesn’t matter.) it’s time to get cooking!

Let’s get this S.O.S going!

Grab a large, heavy-bottomed skillet and slap it on medium-high heat. Then add your butter, or other fat of choice, and get that melted.

Add your chipped beef and brown it a little in the butter. (We’re just adding color here. The beef is already cooked, so this only takes a minute or two.) You want to see the beef relax and soften a bit.

Now add your flour and give everything a good mix.

Make sure you coat all of the beef in flour. Then add some black pepper. (Do not add salt! This is already more than salty enough.) Keep on stirring until the flour is a nice golden color.

Now it’s time to add your milk. (You can use condensed milk mixed with beef stock if you prefer. I just use milk, and to me, it tastes just fine. But hey, it’s your kitchen. Do what makes you happy!)

Keep stirring. Reduce the heat to medium-low and let everything simmer until it thickens up Try to get the chipped beef to separate a bit so that every serving has an equal amount.

Now is also a great time to get your toast going You’ll be needing it in just a second.

A quick note on the toast you use for your shingle.

This is not the place for fancy bread, Guys. In the late 2000s, I made an updated (and potentially pretentious) version of this dish using a mushroom sauce on French bread. And it was good. But it’s definitely not the classic version of the Same Old Stuff.

For this recipe, you’re going to want to use plain white American sandwich bread. And you want it toasted until it’s about the consistency of a plank of wood.

Don’t worry, the creamed beef will soften it right up. But it’s really the texture the bread brings to the table that we’re after. (Without some heavily toasted bread, this recipe really doesn’t have much of a texture.) That little crunch from the edges of the toast is what makes this meal satisfying.

And That’s it. You’ve made the classic version of S.O.S!

Now toss in some parsley (if you want to. I don’t.), ladle a good bit of your creamed beef over a couple of slices of toast, and there you have it, Y’all. Creamed chipped beef on toast.

This stuff is gorgeous in its simplicity, tastes pretty darned good, and it won’t leave you hungry. All in all, a great dish to serve for brunch on a weekend, or even for dinner on a busy weeknight. Especially if you’ve got hungry teens around.

Here’s the full recipe for Creamed Beef on Toast:

Creamed chipped beef on toast (Also known as S.O.S., Shit on a Shingle, Same old Stuff, Stew on a Shingle) Is a classic American dish that's been pleasing families for generations. Originally developed for the U.S. Military, this is one recipe you must have in your recipe arsenal.

Melt butter in a large, heavy skillet over medium-high heat.

Add beef and stir until browned. (About 2 minutes.)

Add flour and pepper. Stir to coat and cook until flour is golden and smells nutty. (About 3 minutes.)

Add milk, stirring constantly, and bring to a simmer. Reduce heat to medium-low and continue to simmer, stirring often, until sauce has thickened. (About 5 minutes.)

Be sure to soak and rinse your beef. This stuff is extremely salty, and can easily overpower everything else.

As an Amazon Associate and member of other affiliate programs, I earn from qualifying purchases.

It doesn’t matter if you call this by its proper name of “Stewed chipped beef, with cream sauce, served on toast“, or by the more colorful names, like Shit on a Shingle. This is simple, hearty, flavorful food that can be made on any budget, by anyone, and anywhere.

And it’s not just loved in America. This dish managed to find its way home with soldiers from other Allied nations during the World Wars, and it’s enjoyed overseas sometimes as well. So in a way, it’s a humble American contribution to world cuisine.

It may never win any Michelin stars. But S.O.S. is more than good enough to be served at any dinner table. And I truly hope you’ll give it a place at yours.

And now to you:

Did you eat this recipe growing up? If so, what was it called in your house? And was it this version, or one of the many, many variations?

We’d love to hear your stories. And if you make this recipe, please be sure to share it with us on social media, or drop a comment here. We love to hear from you!