My Recipe for Colcannon, Irish Comfort Food at its Very Best 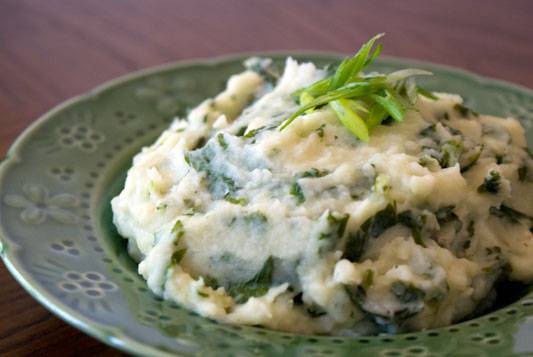 Colcannon is something I just had to try this year. In Ireland, this dish is traditionally served on Halloween. Until quite recently this was a fast day and no meat was eaten. The name of the dish is derived from the Gaelic “cal ceann fhionn”, which translates to “White-Headed Cabbage.”

This is a dish that I’ve meant to try for a very long time, but seem to have managed to avoid for one reason or another. I’m sorry now that it took me so long to get around to it, as this is an intensely flavored yet supremely subtle combination that elevates both the humble potato and cabbage to levels I didn’t think either was capable of. It went perfectly with the corned beef and potatoes we traditionally have on St. Paddy’s Day and played extremely well with a good pint of stout. It is also completely vegetarian, which is a switch from my normal offerings, though that is something I’m trying to remedy.

Colcannon is made with either kale or green cabbage. I used the cabbage on this round simply because it is obscenely inexpensive at this time of year at most stores in the U.S., whereas kale is not inexpensive at all right now in my location. It really doesn’t matter the cost any longer, though. This is something I’ll be making throughout the year from now on.

This recipe was made verbatim from My Irish Cook Book, by Monica Sheridan, printed in 1966. A reprinted and updated edition is available under the title The Art of Irish Cooking

. I highly recommend this book to anyone who would like to experience Irish fare at it’s best, which is to say, home-cooked and full of the love of the food itself.

TIP! To mellow the scent of boiling cabbage, which can be a bit potent for most people, simply peel a small onion and add it to the boiling water with the cabbage. The onion sweetens the odor of the wilting greens and renders it far less offensive.

1
Amount Per Serving: Calories: 212Total Fat: 4gSaturated Fat: 2gTrans Fat: 0gUnsaturated Fat: 1gCholesterol: 9mgSodium: 132mgCarbohydrates: 41gFiber: 5gSugar: 3gProtein: 6g
What I would have done differently had I thought of it at the time:

The next time I make this dish I think I’ll wilt the cabbage by sauteing in butter rather than by boiling. I think it will make for a deeper and more intense flavor. It may not be traditional, but I think it will still be good!