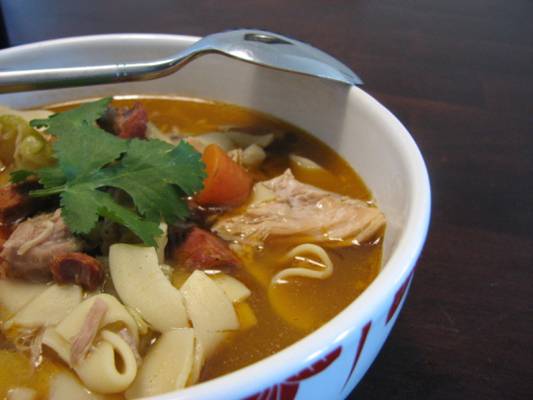 There’s simply nothing better on a cold windy day than a good bowl of piping hot soup. Add a bit of drifting snow to the equation and it’s almost mandatory that a good hearty soup comes into play. Thursday was that day. Though the snow never did stick, the temperature shifted from the mid-’70s to a crisp 28 degrees. Add wind-chill and you’ve got 20 degrees and a pot of soup on the stove was the perfect way to take the chill out of the house, and us.

This variation on the classic chicken noodle soup gains a lot of flavor from the addition of chorizo, both to the broth and as an addition to the finished soup. The addition is simple, but the flavors the spicy little sausages add to the broth is amazingly rich, deep and filling in ways that no “normal” chicken noodle soup could ever be. The broth is also made with a bit of cilantro for further depth and the addition of a slightly earthy flavor that is just a bit unexpected in a bowl of chicken soup but is immensely satisfying.

1
Amount Per Serving: Calories: 731Total Fat: 45gSaturated Fat: 13gTrans Fat: 0gUnsaturated Fat: 30gCholesterol: 303mgSodium: 1768mgCarbohydrates: 26gFiber: 3gSugar: 5gProtein: 60g
What I would have done differently had I thought of it at the time:

To be honest, nothing. I think this was one of those singularly perfect dishes that came from inspiration and became something far more than the sum of its parts. I’ll be making this again in the future.