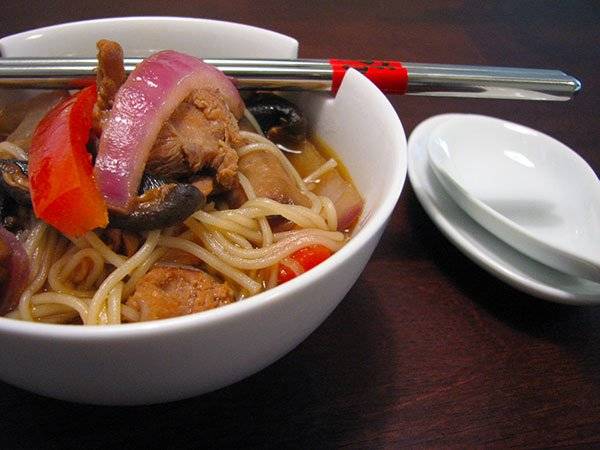 I love Japanese and Chinese noodle soups almost as much as I like stir fry. The flavors are simple, pleasing and sustaining while still managing to be very light, something most American soups and stews cannot accomplish. This is an Asian inspired soup. This dish was not made from any traditional recipe, I just added flavors that remind me of other soups I’ve had in the past and with a pretty good result if I do-say-so-myself.

If you’re looking at the title and wondering where to get yourself some nyumen noodles or why you’ve never heard of them, they are simply somen noodles served warm. The Japanese are famous for giving a whole new term to something if it’s prepared differently, and this is one of those cases.

This meal actually started its life as a stir fry, but just as I was getting ready to go to it, my wife mentioned that she’d like a soup. In my mind there really wasn’t an issue there, and I grabbed the last of my somen from the pantry and put it on to boil, using a method I learned several years ago for cooking udon noodles, which I will detail below.

In the end I found the broth to be just a bit bland. I think next time I’ll empty the contents of the skillet first and saute some onions, garlic and a bit of ginger before deglazing, and perhaps add just a bit more vinegar. Other than that, this soup was just the right choice for a not-so-warm afternoon, and gave my chopstick chops a workout, which they definitely need before my wife and I visit the Mongolian Barbecue or Samurai Sakura restaurants again. (There’s something to be said for tradition, but forks aren’t even an option in these two places…)

The method I used for the noodles is a bit labor intensive, but it keeps the noodles from getting over-soggy in the broth. I’m not sure why this is, but it works, and I’m not arguing with it.