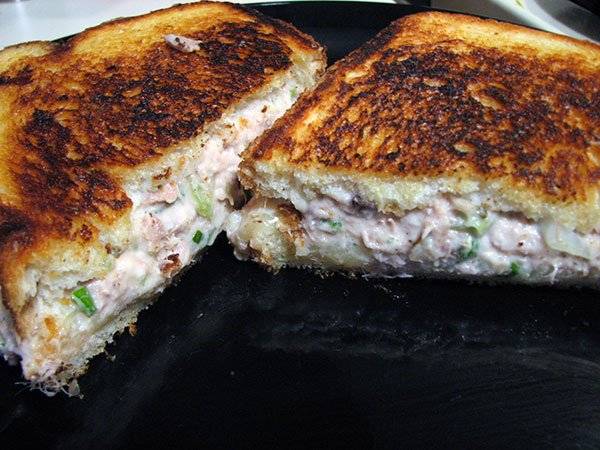 Blame it on Elise Bauer. I do. I was browsing through my favorite food blogs recently and came across a photo and recipe at Simply Recipes that made me stop and drool profusely. Not only did her Tarragon Tuna Melt make me want to run to the kitchen and get cooking, and once again her photography skills brought out the green eyed monster in me. (Down, Boy!)

I love tuna melts. They’re simple, filling and scrumptious, in essence, the perfect lunch. It took a few days for me to get around to it, but I finally assembled my version of this absolutely fabulous sandwich. In fact, we’ve had them twice in the past two weeks, so I’m confident in proclaiming it was a hit with my wife as well.

Elise’s recipe called for cheddar and while I’m a fan, I prefer a lighter flavor with my tuna. I’m also not particularly fond of tomatoes with it, so I modified the recipe a bit. (Who would have thought that I’d ever do that!?!) I used low fat mayo instead of “real” mayonnaise to cut the cholesterol content a bit, and I prefer to brown up bread in olive oil rather than butter. I just like the flavor and texture more, not to mention that it’s a bit better for you.

The reason for the differing amounts is that light mayonnaise doesn’t “quite” cook the same way regular mayo does. The lack of egg whites makes light mayo a bit runny, whereas heated “real” mayonnaise acts as a bit of a binder.

Honestly, everyone has their own favorite tuna salad recipe, and whatever yours happens to be, it would probably make a pretty phenomenal tuna melt. Try whatever you like, the worst that could happen is that you’ll make it better next time!