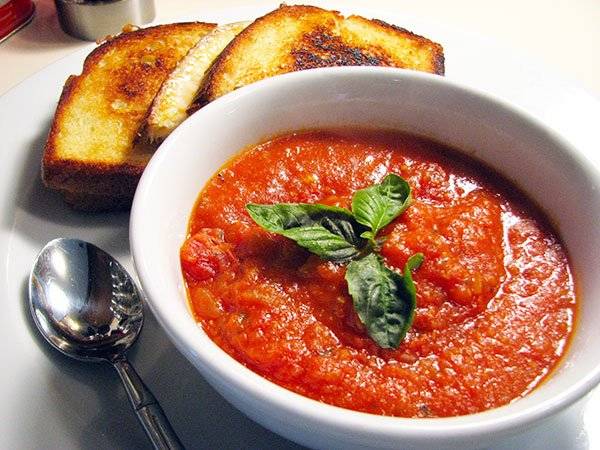 Fall is just about upon us. Cooler weather has settled in over much of the country. Most of my fellow food bloggers have broken out recipes for braised, slow cooked foods that highlight the best ingredients that fall, or at least late Autumn, has to offer in their area. Looking over their recipes has me dreaming of cool afternoons and a dutch oven simmering over low heat, waiting to offer up its succulent slow cooked contents for our family, and my son’s first taste of braised pork roast or slow roasted chicken.

Here in the great state of Texas, we’re still dealing with 90 degree days, but the mornings are foreshadowing cooler days to come. The cravings for more winter-esque foods are becoming increasingly pronounced as the days get shorter, and yesterday I caved in to them. The result is this tomato basil soup recipe.

Tomato soup paired with a grilled cheese sandwich is not only the perfect cool weather lunch, though the combination has definitely been one of the most common in my household for years. The two together are also a quintessential American comfort food meal of nearly epic proportions, so I doubt too many people will find it surprising that I chose this combination for my first officially “fall” dish.

I won’t go into the sandwich in this entry, as it was a simple Muenster sandwich browned in olive oil. The star of the show is the soup and it is what deserves our attention here. Thick, rich and so very satisfying that it could almost be called a tomato stew, and could definitely be used as a sauce, it’s a far cry from anything you’ve had out of a can, and more than worth the trouble to make, I assure you.

This sup is nearly thick enough to be considered a tomato sauce. The addition of a bit of cream might make it a bit more like the stuff you get out of a can, but I’m really not sure it would make it any better than it was. As it is, if you omit the white roux (the mixture of flour, butter and vegetable stock) , it could serve very nicely as a simple tomato sauce or simple marinara, though that’s not nearly enough to deter me from making it again.

Honestly, it was a wonderful, filling and soul-soothing experience that both I and Mrs. Seat of her Pants enjoyed very much. We had actually planned to re-purpose the sauce as an ingredient in a pork loin recipe until we lost power that evening, an event that sent us off to a local diner for dinner instead. (And my choice of dinners is still giving me grief today, I might add… I’ve got to remember to avoid their chili!)