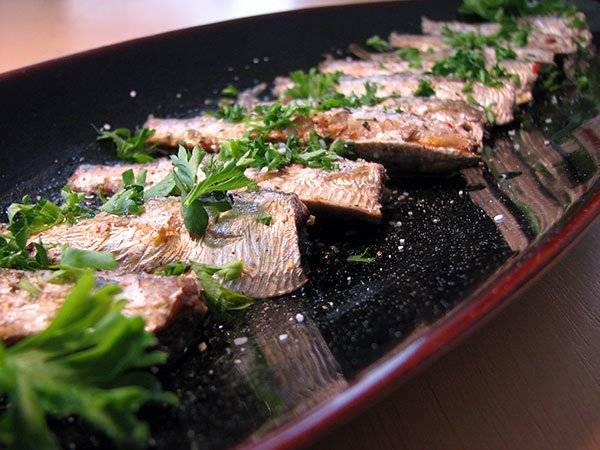 in my wife’s cookbook collection a few months ago. The impact that just flipping through the pages had on me was intense, immediate and life-altering. I had to try some of this, and soon!

Unfortunately, soon wasn’t soon enough. With everything that’s been going on in our lives, this book has sat on my desk, forlorn and forgotten for far too long. It’s happy tales of Greek lifestyles and traditions, recipes and reminiscing tone all but relegated to obscurity… Until today.

For those who don’t know, meze is the Greek equivalent of Tappas. Small portions of food absolutely loaded with flavor, but each celebrating the main ingredient. The ingredients are generally simple, and while not necessarily something that every American household might have on hand, they’re all fairly easy to find in local markets now.

The first recipe that caught my eye when I flipped open the cover wasn’t really a recipe at all. It has no name, as such, simply a quick set of directions for turning sardines into meze.

Sardines?!? Why not. Sardines are a staple in a lot of regional cooking, especially near water. Monterey Bay’s Cannery Row was putting out literally tons of canned sardines in its heyday, and they’re still a favorite of locals there today. It may seem strange to some of us, but if you live in a place where the economy is blessed with an abundance of seafood, it wouldn’t seem strange at all.

I’m not sure what I expected when I put this together. Whatever it was, it fell very short of the mark. I’ve never thought of sardines as something I’d serve at a party… Until now that is. The flavors were subtle, sublime and nearly captured the essence of the ocean in every tiny bite. Even though the ingredient list is only four items, the sheer impact of the dish was enough to make me wish I’d made more, though it’s probably better for the waistline that I didn’t, I would have eaten every bite. 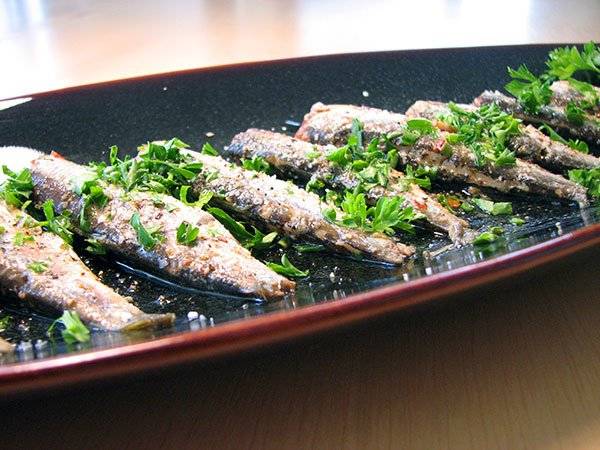 I didn’t have any lemons or flat-leaf parsley when I made these, so I had to do some by the seat of my pants adjustments. Lemon juice is usually called for because the recipe needs some acid, so I substituted California white wine vinegar for the lemon juice, and regular curly-leaf parsley for the flat-leaf that I haven’t been able to find lately.

The dish was still absolutely amazing, but I’d like to try it as written before jaunting off to modify it. (Lime juice, cilantro and a bit of garlic sound good to anyone else?)

You’ll be seeing more recipes from this book as time goes on. Do yourself a favor and go pick up a copy, or borrow it from a friend who has it, you won’t be disappointed.