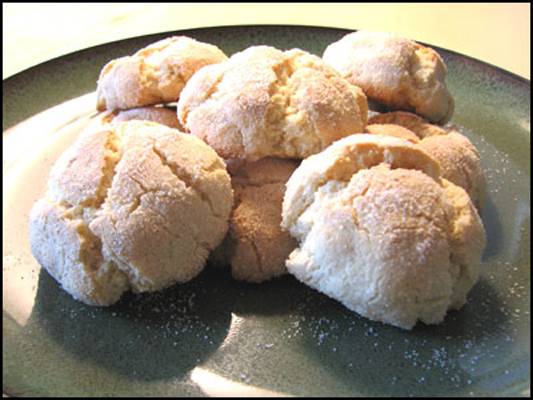 I may have been feeling a bit under the weather for the past week, but Mrs. seat of her Pants was in good form. Aside from making sure that I was pumped full of fluids and getting plenty of rest, she decided it would be a perfect time to whip out a batch of cookies. (While I wasn’t in the mood to fight her over them… I’ll remember that the next time she’s not feeling well!)

Snickerdoodles are a consummate favorite of mine, as they are perfect coffee-dunker’s, and I always have a cup of very strong coffee on hand. I love the texture nearly as much as I do that of York Cookies, and they pair just as well with milk, tea or cocoa as they do with a good cup of coffee. (Mrs. Seat of her Pants is not a coffee drinker, which is fine, as it leaves more for me!)

I did manage to lighten the load on the platter by one or two of these little gems before they all disappeared, and will probably ask for another batch soon, now that I can fully enjoy them.

This particular batch of Sinickerdoodles had a texture that differs pretty wildly from anything I’ve had before. I’m going to chock that up to the fact that my wife is an excellent baker, and that the sinickerdoodles I’ve had in the past were either from a different recipe, or just not made as well.

My wife isn’t as big a cinnamon fan as I am, so I probably would have upped the amount of cinnamon used in the mix to about 2 tbsp., rather than the 2 tsp called for. Aside from that, these cookies were phenomenal, especially when dipped in a nice, hot cuppa java.