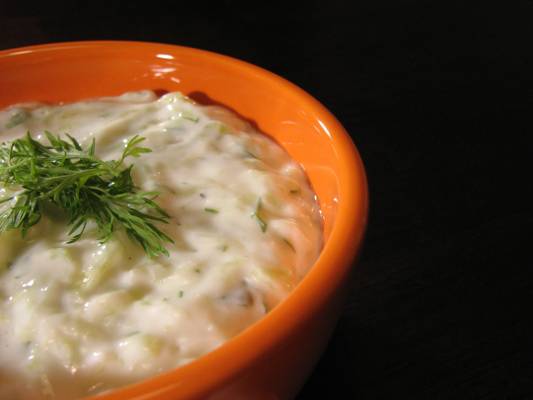 I had my first taste of tzatziki about 400 feet from the main gate of The Great Lakes Naval Training Center in the city of North Chicago, Illinois just about 20 years ago at a local Gyro stand. I’ve been in love ever since. It probably helped that there is a huge Greek population in that part of the U.S. Had there not been, I may have been greeted with one of the sad and rather pathetic attempts at this condiment that I’ve had since. Had that been the case I never would have tried it again. If tzatziki is made incorrectly it is, quite simply, rather foul.

It was the first time I’d eaten a gyro. I still remember the joy I felt at the incredible melding of flavors from the gyro meat (A combination of lamb and beef, with some extras added…), the lettuce, tomatoes, and this wonderful cucumber scented sauce. It was such a sublimely beautiful experience that I ate there at least twice a week for the rest of my time in Illinois. (much to the delight of the owners, I might add. I personally made them a few thousand dollars while stationed there.)

I’ve attempted to make my own tzatziki several times since then, but always with questionable results. When I saw that my friend and fellow foodbuzz featured publisher Peter over at Souvlaki for the Soul had just made a batch of his own tzatziki, I decided to give it another go. I’m very glad that I did.

I didn’t use Peter’s recipe, but rather adapted one I found on the Food Network Website. The result was everything I’ve been longing to make for years, and will be the basis for my next several attempts, hopefully with some Greek Style yogurt on the next round. (I couldn’t find any here, which is not surprising in a section of Texas populated with mostly German immigrant families. Ask me for fresh Bratwurst and I can do that for you!)

Tzatziki is most commonly associated with gyros and is sometimes mistakenly referred to as gyro sauce here in the states. While it is most certainly wonderful on a gyro, limiting this wonderful condiment to just that purpose would be a complete shame. It goes wonderfully as a substitute for mayo on a sandwich, as a dip for my wife’s Greek style chicken wings. (Those get posted tomorrow, folks), as a dip for pita chips (or white corn tortilla chips), the uses are really only limited to your imagination. Since making this batch of tzatziki, I’ve used it in three different ways, two of which I’ll be featuring here over the next week or so.

So what are you waiting for? Grab the recipe and bring a little bit of Greece into your day!

I’ve seen threads that mention mixing half yogurt and half sour cream to achieve something more like traditional Mediterranean yogurt, so I may give that a whirl next time. I also think I might have gone a bit light on the mint and dill. (Not the recipe’s fault, but rather my measurements.) I’ve also considered mixing in just a tiny bit of feta cheese for a bit of that goat’s milk tang that this seemed to be missing. Other than these very minor things, this was a beautiful condiment, and one I’ll be sure to make again in the future.