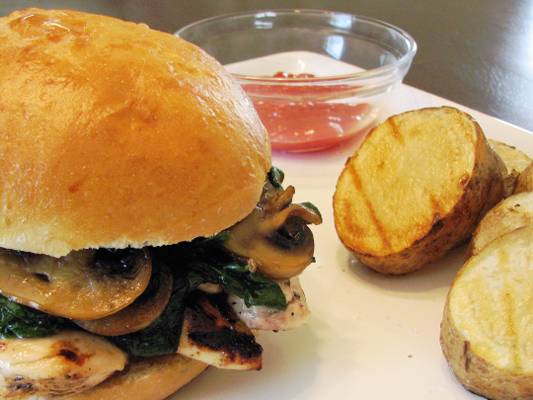 If you’re going to take the time to make homemade hamburger buns, there’s no point in stuffing them with some ridiculous store bought patty. You’ve got to throw some big flavors in to make it worth the effort.For this round chicken marinated in Greek vinaigrette sounded like a plan, but what would I top that with?  Just throwing some lettuce at it would never do.

A quick look around gave me an idea.  In the crisper was some baby spinach that was definitely looking neglected and droopy and there were mushrooms on the counter from last nights dinner.  Perfect, chicken topped with sautéed spinach and mushrooms should make for a huge smile when she walked in for lunch. (One of the advantages of living on base.  I see my wife at least once through her workday!)

I grilled the chicken in this instance, but this could just as easily be made in a pan or grill pan.  I’m not a fan of clam shell grills, but if you are, go with the Foreman, I suppose.  It’ll be ready in a snap.  As for the potatoes on the side…  Well, I’m saving those for tomorrow, just because I love them so much that I think they deserve their own post…

Now back to the sammich!

I would have added a bit of feta, but I was out.  A little lemon juice might have been a nice touch, though.