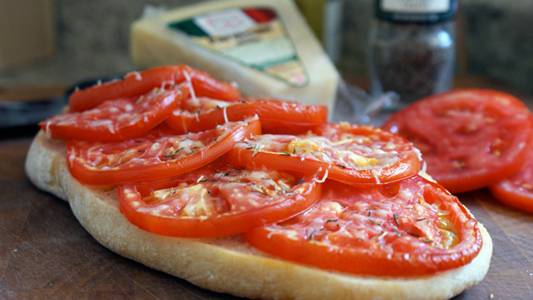 Not too long ago, tomato tart recipes started flooding the world of food blogging.  To say the least, I was intrigued, but I really hadn’t planned on making this dish…  That is, I hadn’t planned on it until my next-door neighbor dropped off a huge box of home-grown tomatoes.  At that point it became more than a desire, it became a pressing need.

I had originally thought of just making a bunch of crostini, but when I saw a lovely loaf of garlic ciabatta at Trader Joes, I decided that I’d play with the tart idea in a decidedly non-baker sort of way.  Ciabatta is robust enough to hold up to the moisture in the tomatoes without getting very soggy and adds a lovely flavor and crunch to the dish, which was perfect as a light breakfast for my wife and I.

If you’ve got some tomatoes hanging around this season, I would highly recommend making this, or one of the variations listed at the bottom of the post.  It’s a little bit of summer on a plate, and I guarantee that you and your guests will love it. 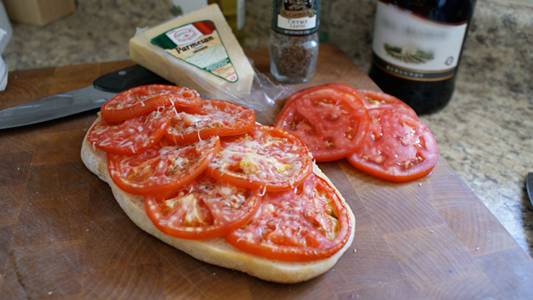 As laid out, this is a wonderful tart/crostini, but it can be a bit difficult to manage.  If you’re planning on serving this at a party or at a larger dinner, try cutting the ciabatta into small fingers or bite-sized pieces before assembly.  It will make the dish much easier to deal with if it’s running around on appetizer platters.