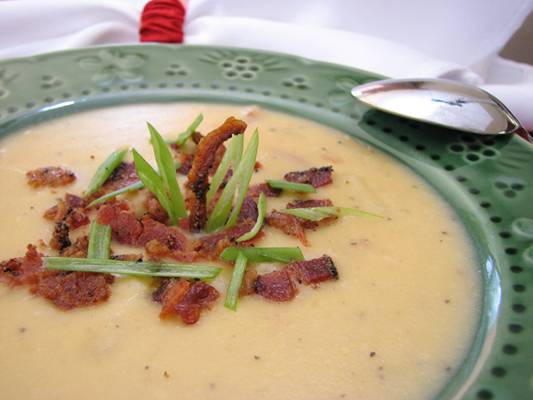 Winter weather means soup.  For my family, soup usually means something extremely hearty that sticks to your ribs and will keep you warm through a cold night on the Great Plains. (Which, if you’ve never experienced it, gets very cold indeed!) For me the king of all rich and hearty soups is this potato bacon soup. Loaded with bacon, butter, cream and every other heartwarming hing I could think of. This is my take on it.

This soup is filling, very filling.  It’s incredibly thick, sumptuous, rich and warming. It’s slightly thicker than most potato soups and the bacon adds a certain richness to the earthy flavor of the potatoes that I don’t think ham quite accomplishes, though it’s the more traditional addition to this dish.

A warning, though.  If you’re looking for something light, this ain’t it.  There’s enough cream and butter in this potato bacon soup recipe to make staunch dieters cower in fear, and your cholesterol levels may never be the same again.  Having said this, I only recommend this as an occasional treat.  One you’ll savor when the weather is chill and the nights are long.  It’s not every day fare, it’s comfort food at the highest level, with the calorie count to match.

This recipe makes enough potato bacon soup to serve about eight people, but don’t worry about scaling back if you’re only serving one or two.  It freezes extremely well and  easily stores frozen for three to six months in airtight containers. That way it’s just waiting for you the next time the weather gets seriously chilly and you’re in need of a wintertime boost of soothing, satisfying warmth.

This rich and creamy potato bacon soup is sure to warm your heart from the inside on even the coldest winter night.

I wish I’d had some fresh parsley on hand for a garnish.  Lacking that, the onions and bacon did just fine.

Expect to see a few variations on this recipe over the winter.  It’s really my basic potato bacon soup recipe.  There are many more ways to mix this one up for something completely different!