Roast Turkey for the Soul 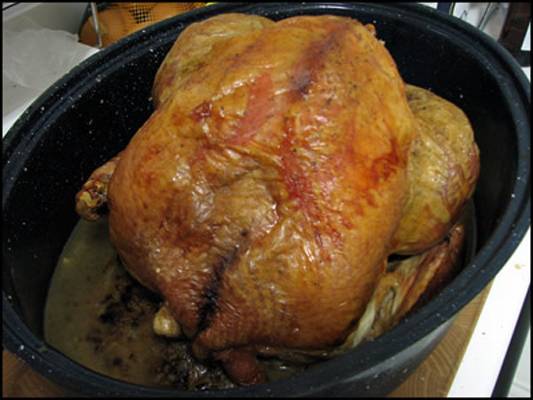 I don’t know what made me decide to roast a turkey in February. Then again I don’t really dwell on these urges much, I just go with them, especially when the turkey is selling for 60¢ per pound. When I find a bird like this at a price that low, I just can’t help myself.

Perhaps it was because some of my fondest memories regarding food revolve around this grand foul, this prince of poultry. Meals around the Thanksgiving and Christmas table with family and friends I’ve not had the chance to see in years. Perhaps it was the thought of all those yummy turkey sammies in the week to come.

Whatever it was, I couldn’t resist, and Turkey was on the menu for Thursday.

Most of you know that a lot has gone wrong around our house this week. My computer failed, leaving me performing what turned into a solid week of recovery. Mrs. seat of her Pants came down with a bout of food poisoning, and Mr. seat of his Diaper has had a particularly cranky few days as well.

I should have known something would go wrong here as well.

This bird had sat in the fridge for a week. More than enough time to defrost thoroughly, right?

Upon removing it from the package, I was greeted by quite a bit of ice and very much frozen poultry. This should have deterred me, but it didn’t.

The experts tell us that you should never,Ever, EVER cook a frozen or partially frozen bird. But hey, since when do I kowtow to them. I had a plan, and a simple one, since I knew we’d be heading out the minute my wife got in, I’d just cook the bird at a lower temperature and add the ultimate cooking catalyst to the mix.

Steam, in the form of one long neck bottle of beer.

So, the bird cleaned and rinsed as well as possible, salted, peppered and stuffed with onion, garlic, thyme and 12oz. of the “beer of the day” went into a 325°F oven and off we went.

We returned about an hour later and the temp was increased to 350°F for another hour.

I’ve got to admit that the breast was dry… A first for me in making a turkey, but I’ll attribute that to the fact that it was a ButterBall, and that all of the puncture wounds they inflicted on the breast allowed most of the juices to flow out of the bird. The rest was gorgeous, and did quite well for a series of leftover meals that, unfortunately, were never photographed due to my continuing quest to get my computer back on its feet.

Now that all of my computer woes seem to be solved, you’ll be seeing a lot more of me.

Have a great day.