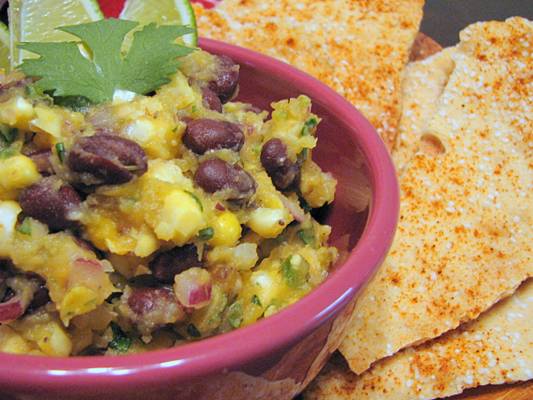 Sometimes when you’re making something new, you run into a snag or two.  This Daring Bakers Challenge was one of those times. It was an evening of crushed hopes and disappointment, tempered with elation and extreme satisfaction. How is that possible, you ask? Let me tell you.

After coming off a very long hiatus from participation is the Daring Bakers, I decided that I’d dive back in this month when I heard that the challenge was to make crackers and a topping.  I may not be much of a baker, but crackers definitely seemed to be up my alley.  The biggest challenge for me was that the topping had to be both gluten free and vegan. Definitely a challenge for a cook who still has bacon grease neatly stored in his ice box just waiting for the next time he makes potatoes or collard greens.

I’d chosen to make the regular glutenous crackers, because I have no need of gluten free ingredients, which would summarily go to waste. The experiment started off well enough.  I followed the instructions for the dough with a bit of help with substitutions from fellow Daring Bakers.  All went together smoothly, the dough smelled wonderful, rose nicely, rolled perfectly and went into the oven with a sprinkle of paprika and a bit of salt as a topper.  All was fine until it was time to pull out the crackers.

They weren’t done.  Not even close.  According to the instructions, I was to “Bake for 15 to 20 minutes, or until the crackers begin to brown evenly across the top (the time will depend on how thinly and evenly you rolled the dough).” but at 20 minutes the dough was still soft and had not browned at all.  At 30 minutes it had browned just a tiny bit, and was pulled anyway.  It was also as hard as a rock and completely inedible, though perhaps useful as a croûton in soup.

I don’t know if it was my oven, if I overworked the dough, or if my skills at noticing “browning” are not up to par.  Whatever the reason, I cannot comment on the crackers because mine failed.  As a matter of fact, I did nothing special at all with them, so I’m not even going to post a recipe here.  Just go check out the Daring Bakers blogroll for a few people that actually got them to work!

NOTE: My wife just told me I was full of it.  She loves these crackers.  As a matter of fact, she’s munching them right now.  Apparently it has more to do with my dental work than my baking skills. YAY!

The topping was a different story altogether.  After having read this post by my friend Jenn, I knew I had to do something with the three sisters again. My roots are Native American and the combination of corn, beans and squash is something that I grew up on, but one I have not had in some time.  It sounded like the perfect combination for a spread, and it oh, but it was! The result was creamy and crunchy, sweet and bitter, just a bit spicy and perfect for anything from crackers to lamb.  Give it a shot, I think you’ll like it!

So, dear readers, I give you both triumph and failure today, but the triumph is worth it.

I’m really not sure what happened with the lavash crackers.  I’ll have to give them another try in the future, but for now, I’m thinking it was my skills as a baker that caused the failure.  More to come on that later.

As for the salsa…  It’s just about perfect.  Give it a shot, you’ll be addicted before you know it.

And don’t forget to visit this month’s challenge hosts, Natalie of Gluten A Go Go and Shel of Musings From The Fishbowl. It’ll be worth your while!