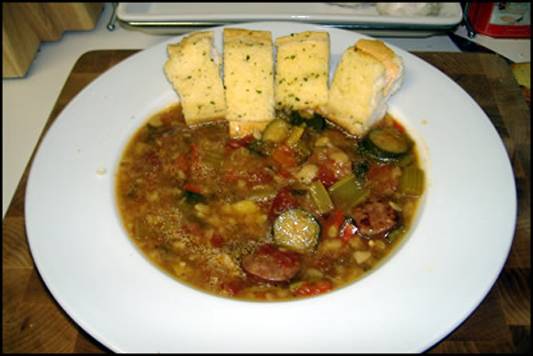 The weather here in Texas has been on the cold side for the past few days. Temperatures in the Twenties with ice and freezing rain. It’s horrible weather to go and do anything in, but perfect weather for a good stew in front of a roaring fire.

I had originally planned to make either a beef stew or a pork stew with some leftover pork roast I had in the fridge, but realized that neither my beef or pork larder was large enough for a stew that would produce leftovers. I did have a ton of sausage though, so off I went to search the food blogs for a sausage stew recipe.

The inspiration for this stew was found at La Mia Cucina. The original post and recipe can be found here, and I want to thank Lis for posting.

The recipe at La Mia Cucina called for cabbage, but I didn’t happen to have any. If you’ve read anything here you’ll know that not having the required ingredients isn’t enough to stop me from trying, so off to the fridge to see what I did have that looked like it would go well with the kielbasa.

What I came up with was pretty basic stew fare. The only thing missing from the photo at left is one can of diced tomatoes. The decision to add the yellow squash and zucchini was a pretty simple one. They were getting a bit past their prime and needed to be used and I love both types of squash in a stew. The celery I used as a substitute for the cabbage, and the green onions joined the party because I had apparently splashed my stock of white onions with some water and they had turned ugly on me. (unnerving, since I’d bought them only two days before.) The original recipe also called for beef consommé, an item I don’t usually have around, so I substituted plain ol’ beef stock.

What I would have done differently had I thought of it at the time.

This stew is on the thin side, so if you don’t mind the broth a bit murky, you can add a bit more of the corn starch slurry or make a roux when you add the seasoning mix.

This stew came out so well that Mrs. seat of her Pants has dubbed it “Cool-Arsed Kielbasa Stew”. That was all I could get out of her when she tried it, aside from a steady stream of “Mmmmmmmmmmm’s” and the clinking of her spoon.

I’ll be making this dish again, and soon. It’s ferociously good, warm, hearty and filling. I can’t think of a better dish for a cold winter afternoon or evening, especially with good company. I hope fervently that you’ll give this a try and enjoy!

I’ll even follow the recipe. I wouldn’t want to change a thing about this dish.

Thanks go out again to Lis at La Mia Cucina for the inspiration for this one.