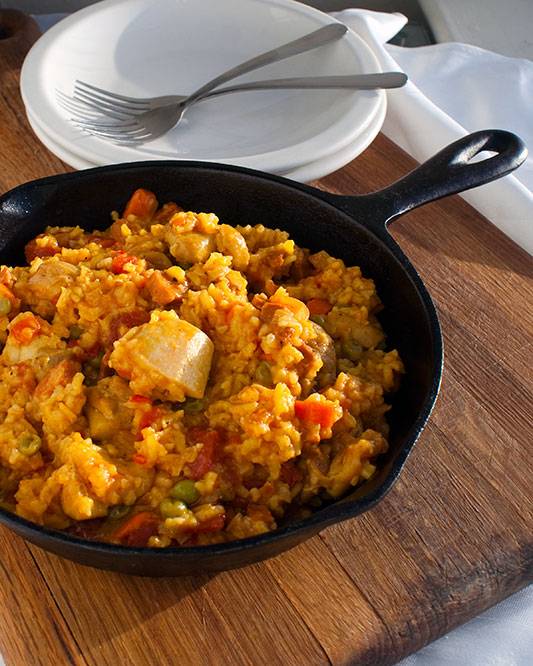 Welcome to another installment of #SundaySupper, hosted this week by the always lovely Isabel at Family Foodie. For this week’s Sunday Supper we were asked to make a recipe from the Mom 100 Cookbook by Katie Workman. This might have posed a challenge, as I don’t happen to own to this particular cookbook (What with not actually being a mom and all), but when the rules were changed to include remaking one of the posts from the previous installment, I knew immediately what I was going to make. Arroz con Pollo.

My wife is out of town with her mother. I miss her terribly when she’s gone but we have a history of staying connected through food, and Arroz con Pollo is one of her favorite dishes. (She makes a mean version herself, I might add.) So I set about reinventing the original recipe a bit, as we are prone to do around here.

The first thing I noted was that the original recipe called for short grain rice. since the only short grain rice I have on hand is sushi rice and sticky rice, that was out. In with the long grain! Second, the original called for kielbasa. while I have nothing against kielbasa, it didn’t seem to fit, so I added Spanish chorizo instead. (A good call, I might add.)

Next, the original called for seasoning the chicken in salt and pepper. Since I wanted to put a more Puerto Rican spin on it, I used Goya Adobo seasoning instead, because it’s what my wife uses. (We were our of recaito and sazon, so I omitted them here.) Also, the recipe called for the addition of paprika, which I simply ignored.

The last bit was that the recipe called for saffron. Yeah.

Saffron isn’t a pantry staple in our home. It’s expensive. It’s delicate. It’s not something I’m going to use in a meal for my kids, unless there are copious amounts of other very expensive foods on the table. (Like seafood or capon.) Luckily, Turmeric, also known as poor man’s saffron, is a more than worthy substitute and one we have on hand at all times.

The result? Well, I thought it was great. My kids absolutely would not eat it. (Not surprising for the 5 year-old, startling for the 11 year-old.) It isn’t my wife’s Arroz con Pollo, but then, nobody’s can be. The first few bites through me off, but once I got past the differences, I ate quite a lot.  Also, since the dish makes a LOT of food, I’ve been happily eating it for the past several days.

The recipe is a keeper, but don’t do what I did. Don’t forget to add a handful of green olives at the end.

I forgot to add green olives… Seriously? I forgot the olives!

Don’t forget to add a half-cup of halved green olives at the end.

Here are some  favorites we will be sharing with you during #SundaySupper this week.

We will be sharing great family recipes all afternoon and want you to share yours with us! #SundaySupper starts every week at 3:00pm EST by showcasing fabulous recipes.  Follow us on twitter by using hashtag #Sundaysupper or using Tweetchat.  We love to feature your recipes on our #sundaysupper pinterest board and share them with all our followers.