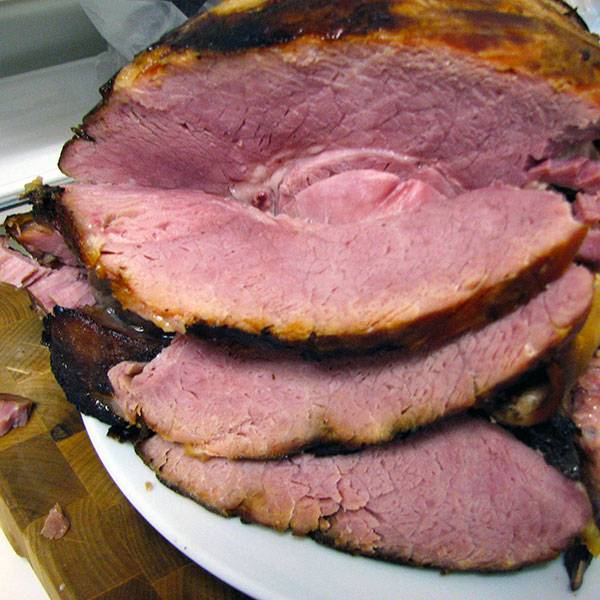 Mine is one of the many American households where Ham is a staple on several holidays. I have slightly different methods for preparing this noble cut of meat, depending on the holiday in question.

For Easter, braising is my preferred method. No cloves will be found in my Easter ham, not that I’m against them, I’m not. I just prefer the first ham of the year to be something a bit simpler, with the essence of apples and the robust backdrop of good red wine, rather than the more traditional pineapple and clove-studded affair.

It’s rich, flavorful and oh so decadent, especially when compared to the lighter foods that seem to come to the fore after the Thanksgiving and Christmas holiday season.

In my mother’s home, a holiday meal would have included several other staples, such as deviled eggs, rolls and a large helping of green beans flavored with just a hint of bacon. For my wife, myself and a 7-month-old, that seemed a bit like overkill.

To be honest, we’re not really celebrating Easter around the house this year. Mr. seat of his Diaper does not yet have a clue who the Easter Bunny is, and hey, he’s not crawling yet, so egg hunts are out of the question too, aren’t they? In fact, I made this for breakfast on Good Friday instead of for Easter Sunday, simply because I happened to be up at some strange hour of the morning with a baby who was decidedly not tired.

This method has advantages, especially if you plan to have a large family dinner or brunch. The ham can very easily be made a day ahead, and You’ll never have a complaint about a dry ham if it’s been sliced and soaking overnight in its own juices. 20-30 minutes in a 350° oven will bring it right back to life, with more flavor than it had when you started.

If you need a better reason to try it out… How about no basting? Yep, I said no basting. Toss it in the oven and watch the thermometer, that’s all you have to do. then you’re free to enjoy family, friends or other favorite diversions while it’s cooking.

You do have a probe thermometer

I used a Crane Lake Merlot for this, which I think was just a hair too bitter. If I had it to do over again I’d probably opt for something that paired a bit better with the apples.

For those worried that the garlic and onions will clash with the apples… Fear not. The onions simply turn as sweet as candy and the garlic chimes in as just a hint of something you can’t describe in the background. It’s beautiful really.

But I’ve gotta have cloves with my ham! Well, you won’t hurt my feelings any. If you do decide you just “gotta have ’em” try studding the apples instead of the ham for a bit lighter touch.