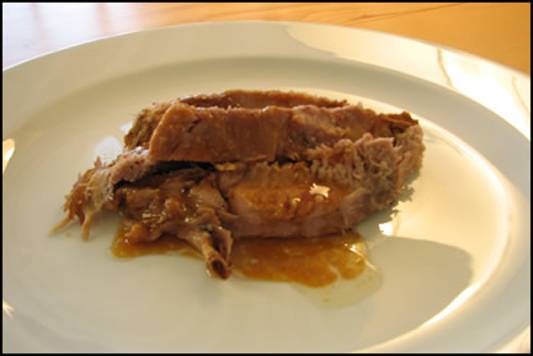 Picnic ham is ham only in the sense that it’s taken from the leg section of our porcine pal. Unlike most ham that Americans are used to, this meat is not smoked or cured in any way. This dish could just as easily be made with any pork roast, but I would shy away from making it with pork tenderloin, since the sauce will never have time to reduce properly, and wouldn’t be as sweet.

The pan sauce in this recipe is the star of the show, and what a star it is.

Cover, place in a 350°F oven until the ham reaches an internal temperature of 165°F. Uncover and let brown until Ham reaches 170°F. Cover and allow to rest at least 20 minutes.

Transfer pan juices to a 3qt. sauce pan over medium heat, add 1 tbsp honey. Whisk in 1 tbsp flour, allow to come to a simmer and reduce by about ¼.

Serve the reduced sauce over sliced ham and enjoy.