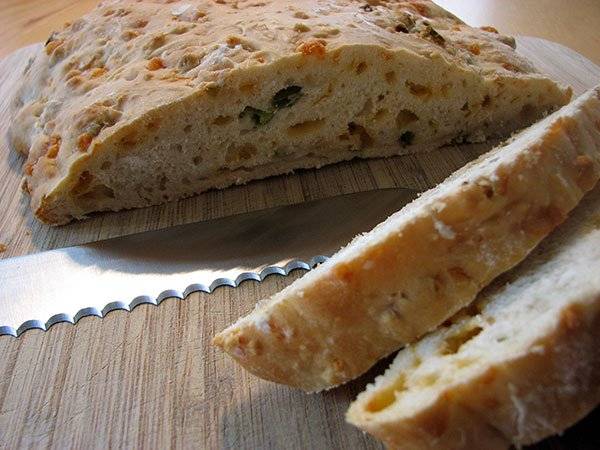 Note: This recipe is now considered a fail. A better, more consistent version is posted here. Please use that recipe instead of this one.

When Lis from La Mia Cucina interviewed me, one of her questions was when I was going to stop waffling on the subject of baking and actually “…bite the bullet and bake us up something fab to drool over…”?

The answer to the question is “I did it on Monday.”

This bread is a lot more tricky to make than it looked in the directions. My wife attempted it the night before I made this, and the recipe failed her. It could be humidity levels or it could be a curse placed on my family by gypsies, but that dough was never gonna work.

The next morning I vowed that no recipe which includes a full can of beer was ever gonna whoop my beer hunting tush (my manliness was at stake here, not to mention the senseless loss of a perfectly good pale!) , so I bought a 24 oz bottle of Corona and went after a double batch. It didn’t take long to discover I was going to have to wrestle with it though.

I measured, and I hate measuring. I carefully followed the instructions… *shudder!* Every single step was double-checked by Mrs. seat of her Pants for accuracy and gained her nod of approval.

And the dough was much more akin to a cake batter than to bread dough.

The instructions say to add more flour if the dough is sticky, so I began sprinkling flour at the dough. And then more… And more… And still, the dough stuck to hands, mixer parts and floured countertops like a living thing fighting for its life. When I’d added nearly double the flour called for in the recipe I finally had something I could form into a round.

*could this be because we used all-purpose flour rather than the unbleached flour called for in the recipe?*

Was all the work worth it? Is this what Lis had in mind for drooling over? I’m not sure, but it works for me.

Once baked off and cooled, this bread has an amazing texture and a wonderfully light flavor from the green onions (scallions) and cheddar. When fresh it is crusty and robust enough to handle any soup, stew or chowder and when wrapped and stored in the fridge for a day or two it is remarkable if heated in a hot skillet with butter.

The recipe is definitely on my “do again” list, and with the knowledge permanently set in my mind that I’ll need a LOT more flour than the recipe calls for I’m sure it will go more smoothly next time, though I wish I knew for sure if it was supposed to have risen more than it did, or if the dough needs a proofing period.

Since this is the first attempt I’ve made at this, it’s kind of hard to say. I think a sharper cheddar would have been nice, and perhaps a few pimientos would have been a nice touch as well. We’ll have to see in the future, ad I will definitely be trying this again.

How To: Turn a Whole Pork Loin Into 9 Full Meals & Save a Ton of Money212K Total Shares