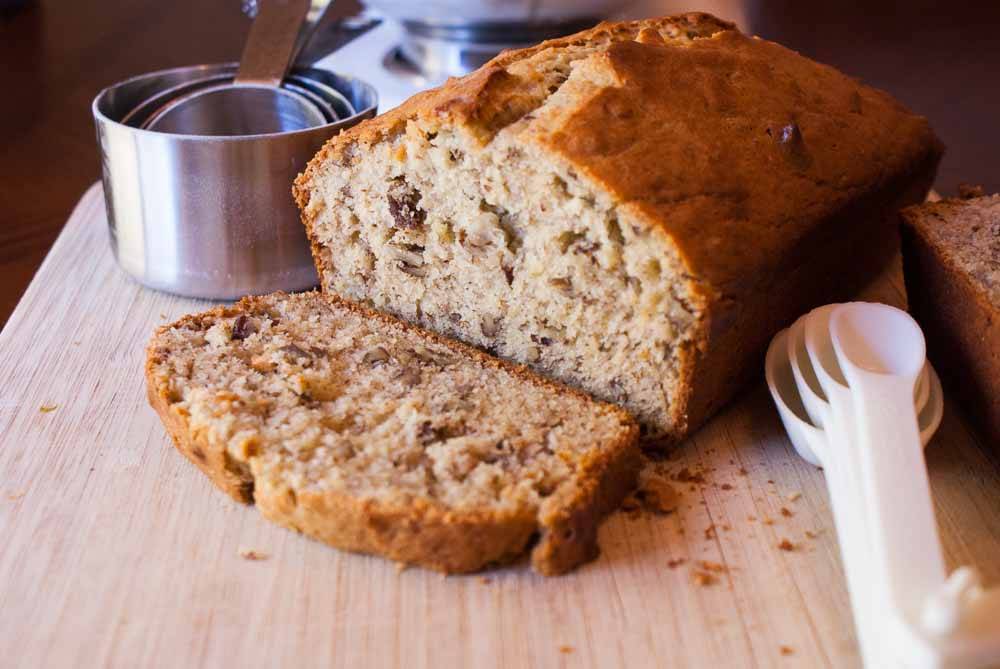 My boys are very interested in cooking and I have to say quite honestly that nothing in the world could make me happier.  I’m working hard to keep that interest alive, so when my son reminded me I’d promised them banana bread this weekend I decided that if he wanted it that badly, he could help make it. He was happy to oblige, even with one arm in a cast.

I may have helped with some of the more difficult parts of the recipe (like cracking eggs, which can be difficult enough for a ten year old with full use of both arms), but for the most part, this is Erik’s bread.  He even made adjustments to the original recipe to suit his tastes.  While this only included adding more nuts, it still made me very proud. 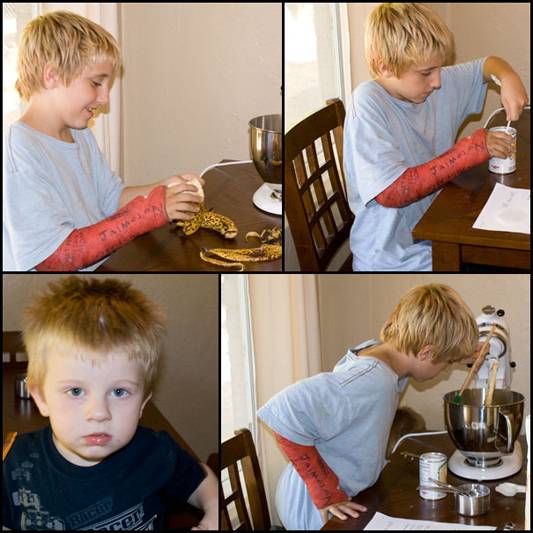 E. Did a wonderful job of following the directions even though as you can see from the collage above, he had a little bit of help from his youngest brother, which at times may have seemed like more of a bother than a help.

And how was the end result?  See for yourself: 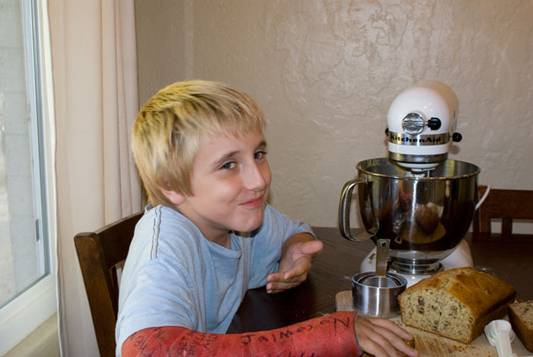 All hail the budding chef enjoying the spoils of his labors.  I’m not sure if he would have enjoyed the bread as much as he did if he hadn’t had a hand in it.  he was proud beyond belief, to the point of calling it “his masterpiece”. 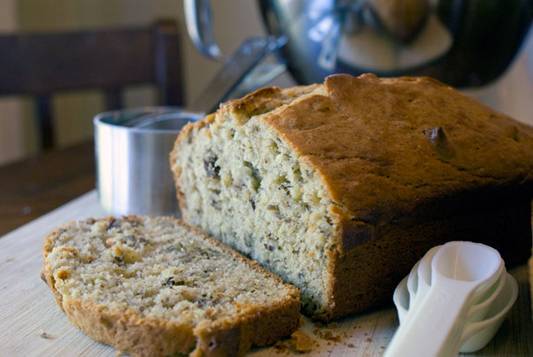 What are you waiting for?  Get in the kitchen and cook something with your kids!  You’ll love every minute of it and so will they.

My son made 99% of this bread and it was wonderful.  I wouldn’t change a thing about it. This is food with all the love a 10 year old can pour in to it.  It couldn’t possibly be any better.

*A note on the pecans used in this recipe:

A long while back I was sent a sample of pecans from the pecanstore.com with the understanding that I would mention them if I thought that they were worth using.  This recipe used the pecans sent in that sample, which had been hidden in a box in the pantry when we moved to California.

I have to say honestly that the pecans weren’t bad, but they’re claim of having the world’s best pecans doesn’t work for me.  This is due mostly to the fact that their pecans are produced in the U.S. and Mexico, which most likely means a blend of California and Mexican pecans.

The food snob in me has no issues with California pecans, but has a serious issue with Mexican pecans, due solely on the texture and flavor.  The transplanted Texan in me has issues with both, and having had pecans freh from the orchards in Texas, I have to say that I prefer the pecans grown in the Red river Valley over most others in the world.

So are these the world’s best pecans? For me no, but they most definitely are of good quality, had decent flavor and made a wonderful addition to the banana bread.  The prices at the pecan store aren’t prohibitive either, so they’re worth ordering from if you can’t find what you need locally.

My verdict, they’re worth using. My compensation: 1-8oz. bag of pecans. (hey, I’m an honest guy. They supplied them, I just review them.)