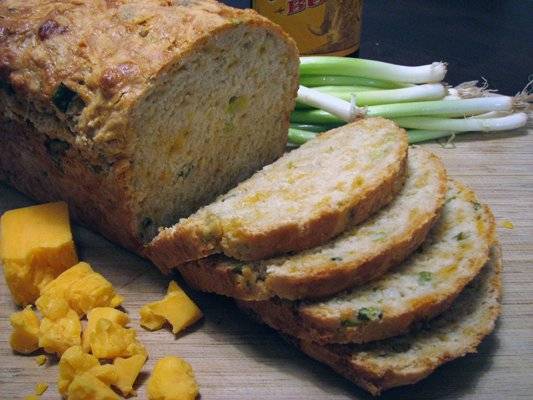 This ale bread recipe is soft, dense, chewy , and full of flavor. Simple to make, but will make you look like a rock star. Perfect for soups!

I had originally meant to title this post “Ale Bread Part Deux”, but I really didn’t want to make it into any kind of a tribute to Charlie Sheen. (Not that I have anything against Charlie, mind you!)

If you’ve been keeping up with this blog over the last year, you’ll know that baking is one of my biggest fears and is something I usually leave to my wife, who excels at it.

I have however, been prodded repeatedly by several people to “bite the bullet and bake us up something fab to drool over”My last attempt at this resulted in something less than what I expected, even after several goes at it. It was enough to send me away from the baking cupboard in shame for quite some time, with every intention never to slink back to realms in which I obviously do not belong.

The problem is, I’m a bit stubborn. Since June, I’ve been wondering what went wrong. I’ve been asking myself what part of the recipe I failed to follow, or whether it was just an innate inability to be precise enough to actually manage the task of baking. Generally I’m a cook. I add or subtract ingredients based on smells, textures and taste at will. You just can’t do that when you’re baking.

It took me 133 days to get up the nerve to face the dough, which had failed so completely to be dough-like on my last attempt that I described it at the time by saying:

“…And still the dough stuck to hands, mixer parts and floured counter tops like a living thing fighting for its life.”

But in the end, I beat the bloody thing…

In the days since june, I’ve occasionally searched for other recipes. For the most part, I found the same recipe repeated, but then I came across this post at Farmgirl Fare, and when I compared it to a comment left on my original post, I realized where everything had gone wrong!

For one thing, the recipe I had didn’t call for enough flour. The ones I was finding now called for an additional cup. Secondly the first recipe we’d tried didn’t call for any sugar, which meant the yeast in the beer didn’t have anything to munch on. No yeast growth, no rise, I had to try this again!

And it was good.

This ale bread recipe is soft, dense, chewy , and full of flavor. Simple to make, but will make you look like a rock star. Perfect for soups!

This post is dedicated to Lis, at la Mia Cucina, who prodded me into baking in the first place. The bread was fabulous, and will be my first choice whenever I make soups or stews from now on. It’s dense, flavorful and oh-so-yummy that it nearly made me want to cry.

I’m not going to try to improve on perfection.