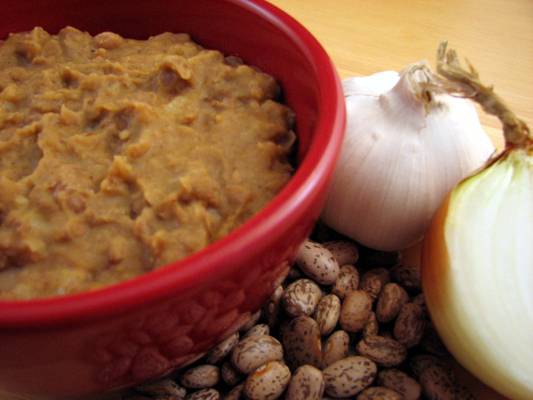 When I heard that my friend Susan, The Well Seasoned Cook was hosting a roundup of legume recipes because she’d seen that it was National Bean Day that morning on “Your Morning Cuppa”, I was not only honored and flattered, but I knew I just had to be a part of it.  I thought about making several different things, from a 5 bean soup, to several varieties of bean-based salads and even a relish, but in the end, there are really two ways I think of beans most commonly.  The first is my mother’s recipe for beans and bacon, the second is frijoles refritos, what americans have incorrectly dubbed Refried Beans.  Since I’ve already made the first variety from my mother’s own recipe, I had no choice but to make the latter, and as a Texan, I was bound and determined to do it right!

This recipe is the culmination of several hours worth of searching the web.  It seems there are as many ways to create frijoles refritos as there are to make pancakes, which shouldn’t surprise me, as this simple dish is a staple in Latin, Latin American and Southwestern homes, which leaves a lot of room for interpretation.  In the end, I took what I liked from several recipes, and left out what I didn’t.  The result was a pretty good batch of beans, if I do say so myself!  So here you have it, my Entry for The Well Seasoned Cook’s Legume Love Affair Roundup, the humble refried bean.

(Note: Refried beans are not refried at all.  They are boiled or stewed enough to soften the beans, and fried once. Technically, they should be called “well Fried Beans” as the term refrito is an emphasized version of the Mexican frito, or fried. Refrito simply means “Well Fried” or “Very Fried”.  We just got it wrong in translation.) 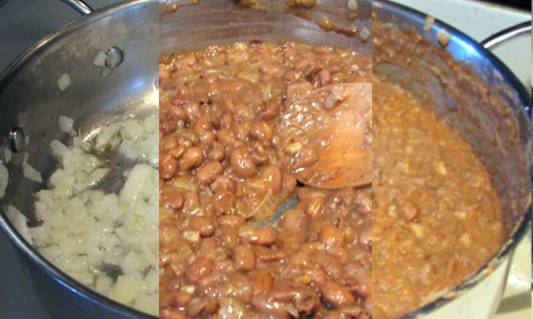 Judging from my wife’s reaction, nothing at all!  For my own taste however, I’m going to pick up a little lard for my next go at these.  For me the flavor was just a little bit flat, and I think that addition might just get it where I want it.