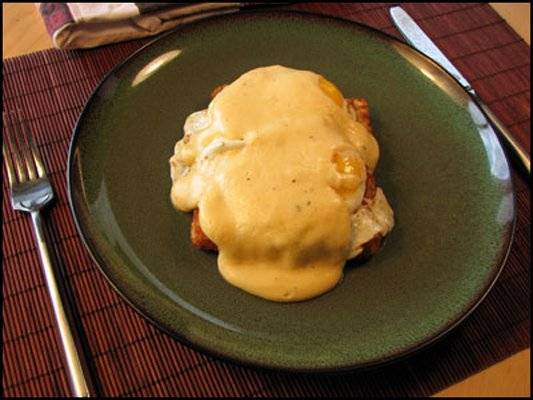 What does the king of cooking blindly do when he’s in a hurry to get his wife out the door with a full stomach but finds that everyone, including himself, is tired of the “same-old-same-old?” Well, he looks in the fridge and the freezer, smiles and rearranges a classic southern dish for a bit more of an upscale feel. Whether it’s early and you’re headed for work or a lazy Sunday at home, this dish is sure to help you greet the day with a smile, and it can be on a plate in less than 20 minutes!

I suppose it could be called a poor man’s Eggs Benedict, but that title is already held by the egg McMuffin, so I decided to name it after my wife, using her maiden name.

I would have added a bit of cheese on top of the hash browns before topping with the ham.

Note: the serve immediately part is not a joke. The cheese sauce as listed sets very quickly and loses any velvety appeal that it had when it was fresh and the hash browns will steam under all that cheesy goodness and lose their crisp texture, which is essential for good contrast.