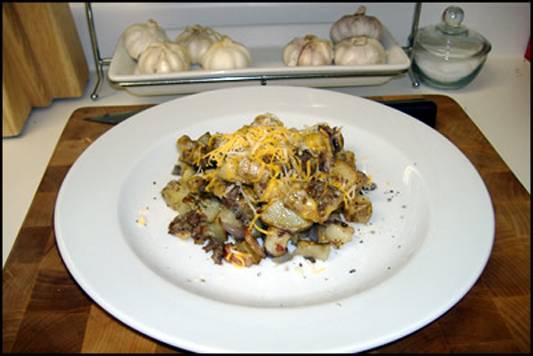 Fried potatoes are a southern staple. They are served at nearly every good southern table, and can be served at any meal. There was a time when I was young that my family didn’t have much, and the running commentary around dinner time was often as follows:

“Awwwww! We had that last night!”

“No, last night we had potatoes and beans.”

Thankfully those days are long gone, but I still enjoy a heaping plate of fried potatoes and I even use the same cast iron skillet that both my mother, my grandmother and my great grandmother used to make them. (much to the dismay of my sister, who probably should have got it, not her cranky older brother.)

I am not going to post the “definitive” recipe for fried potatoes here. There are as many ways to prepare fried potatoes as there are Southern and Midwestern families. They are range food as well as comfort food and southern cooks will fight over who makes the best fried spuds.

In the deep South they’re served with thick white country gravy (not a bad way to go!) Texans usually smother theirs in cheese, and if you move north into Oklahoma you’re more than likely going to find them served plain, with just hot sauce or ketchup, which is how I grew up, and the only way I’ll eat them with beans. Toss in some good savory corn bread (please, not the sweet stuff!) and I’ve got everything I need in a meal.

This particular interpretation is a single-skillet breakfast just dripping with the goodness of bacon, sausage, sauteed onions and smothered in cheese.

Please be aware, this recipe is NOT calorie conscious. It’s NOT good for you. You will probably gain three pounds and harden any artery that’s not already stiff. What you will walk away with is a wonderfully full belly and a real need for a nap.

It may seem like salt has come up several times here, and it has. But you’ll be amazed at how much salt a fried potato can take before it tastes like you’ve salted it. Please also notice that I do not season the potatoes until they have already caramelized. Salting too early will cause them to stick with a ferocity that’s unknown in some other foods.

Now if I’d just made up some beans and hocks, I’d be in heaven.