An ode to a legend: Julia Child’s French Bread Recipe 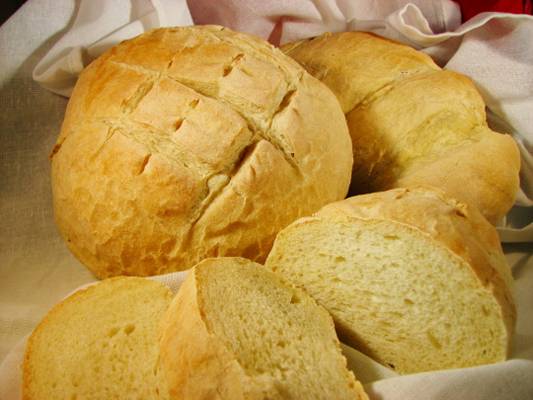 “Welcome to the Daring Bakers, You are tasked with making the one thing in the world that absolutely terrifies you.

Yup, that’s how it felt. I finally decide to go and join up with the rest of the blogging world and try this baking stuff out only to find that my three worst fears had been realized on my very first challenge.

First, I had to make bread. Bread scares me. It’s the simplest thing in the world, I mean four ingredients, that’s it. Four. But yet I have never managed to make a loaf of yeast bead that was even close to edible. No matter how diligently I worked at it, something always went wrong and I ended up with something akin to a hockey puck in the end.

Secondly, This was Julia Child’s’ Recipe! Fer Chrissakes this woman was a culinary deity. I have repeatedly lauded out love and admiration for the Grande Dame of America’s culinary consciousness on many occasions. I was already facing bread, my arch kitchen nemesis, and now I had to try to live up to Julia Child!?!? I was feeling pretty bleak by this point. To fail this recipe challenge meant failing Julia. No pressure there, eh?

I thought about backing out of the whole DB thing right there, I really did. I knew there was no way I was going to make this work. I glanced over the nine frakken pages of recipe and sat for a while in a cold sweat. I mean, I’m not a baker! I couldn’t DO this!

And from somewhere deep in my memory came the voice of reason. A voice I had heard all my life at one time or another and in one form or another. A small voice to be sure, but the most encouraging one I have ever heard.

“Well, it seems the souffle didn’t rise as I’d expected. Don’t worry. This will come out much better when you do this at home”

It was Julia’s voice, from a guest spot on Emeril Live just about a year before her death. It wasn’t the fist time she’d said it, though. It was her mantra. She cooked, sometimes she failed. She did this in front of millions of people once a week for most of her adult life. She inspired millions by doing so. Such names as Emeril Lagasse, Cat Cora, Sara Moulton, Jaques Pepin have all been directly influenced by the powerhouse in an apron. Many more of us nameless home cooks have decided that we too could tackle that seemingly impossible recipe just because Julia said we could manage it.

I believed her then, I believe her now, and she was right. 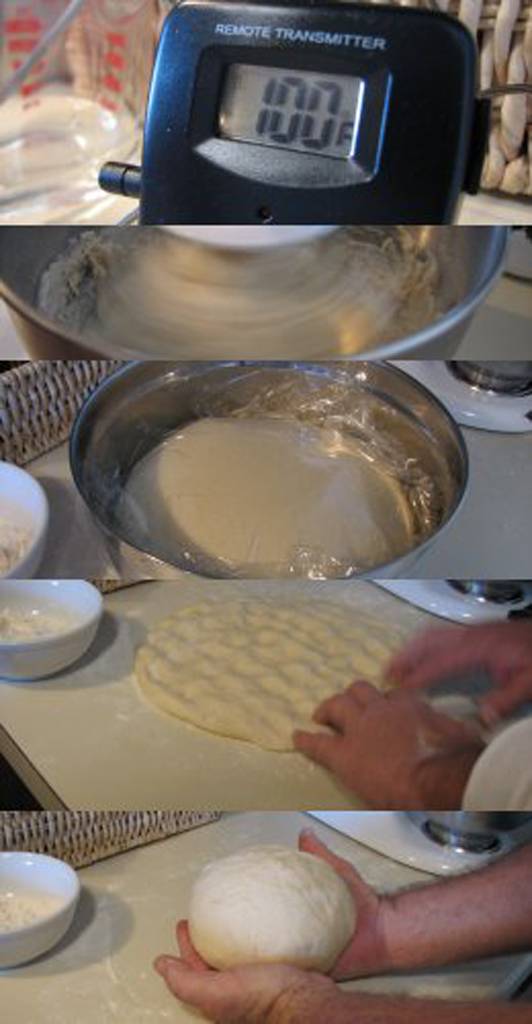 I read, re-read and then read the recipe again. Nine pages is a lot to take in, especially for something as simple as bread, but Julia was pretty adamant about the methods involved in a traditional loaf. I bought the lower gluten flour that was recommended. I purchased a pizza stone to cook the loaf on. I got everything ready and I dove in.

NOTE: This recipe is massive. Far too massive to be printed here. For convenience, I’ve added it as a pdf file julia_childs_french_bread_recipe, or you can check the original at the Breadchick’s Website here.

I measured carefully. I let the mixer work its magic. I hand kneaded a bit and then I waited. Precisely three and one quarter hours later the volume had tripled and I was ready to punch, so punch I did. A little knead and back in the bowl to rise again…

About this point the spirit of Julia was in me, so I popped open a bottle or port (sorry, no sherry in the house) and began happily sipping away while I worked on other projects. The dough just kept doing its thing, and two and-a-half hours later, I was ready to get this thing going.

Plop it out, cut, fold into 12 lovely lil’ pieces and wait 5 minutes. OK, time for more of that port. Unfortunately, we weren’t cooking anything I could splash the port in, so I just tipped my glass towards the bread and uttered another of my favorite Julia-ism’s “Some sherry for the sauce, and some to sauce the chef!”

OK, form up some little rounds, lay out on flour rubbed linen and cover. No problem. Back to other things for about an hour, check in and everything looks petty good, so crank the oven to 450 degrees with the stone in the top 1/3. Get a basting brush ready and sharpen the bejeebus out of a boning knife for nice clean slashes on top of my little soon-to-be buns.

With the oven hot and a pizza peel ready and liberally coated with cornstarch, lift each of the little guys and flip ’em over. One clean slice and it’s on to the next. All 12 in the oven, door closed and brush with water every three minutes for 15 to 20. No problem 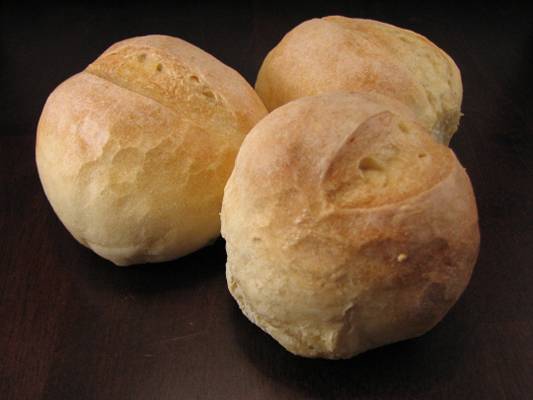 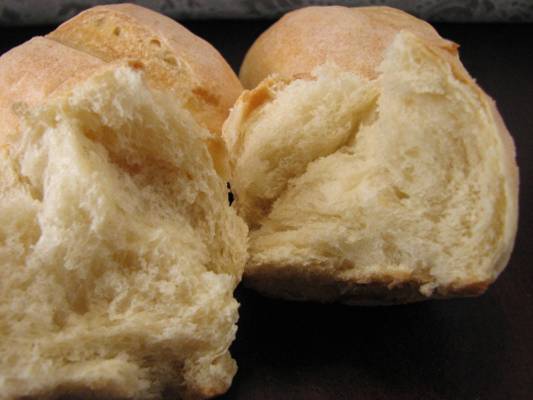 Thanks also to the Daring Bakers and to this month’s hostesses Sarah, and the Breadchick, without whom I would not be writing this today or snacking on French bread as I type.

I suppose this makes me an official Daring Baker, so I’ll set about adding the logo to the site at some point today. To all the other daring baker’s out there, have a wonderful day!