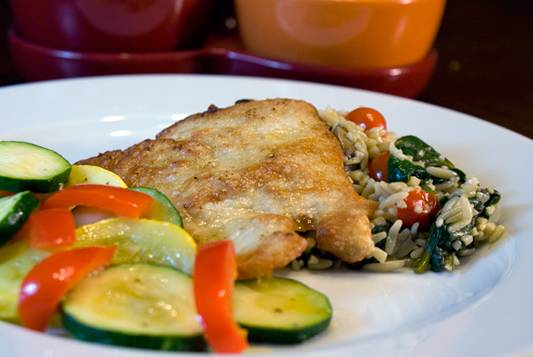 Every now and then I crave something that I’ve eaten a long time ago, but haven’t seen or heard of in a while. It doesn’t matter what it happens to be.  It can be something my mother used to make, my father’s chili, a food that reminds me of somewhere I’ve visited or just something attached to a memory of some time in my life.  Whatever it is that causes me to want that particular dish, once the idea is planted, it stays with me until I give in.  If ignored long enough it overwhelms me completely. This dish began with an inspiration like that.

My first real cooking job was as a line-cook (Or chef de partie) at a chain restaurant called Lyon’s, a California chain sort of like an up-scale Denny’s. It was the very early 90’s.  pasta was served with a blob of somewhat-Italian sauce on top, salad’s were huge and healthy meant you added chicken (cooked with butter.) In the winter, the side vegetables were always broccoli and cauliflower.  In the summer we cooked zucchini and yellow squash.  There were no other vegetable options.

While a side of squash might sound very healthy, the cooking method we used back then gave a lot of flavor, but definitely didn’t do anything to improve the health of our diners.  Several handfuls of squash were tossed into a saute pan with a serving ladle full of butter and tossed until soft, seasoned with salt and pepper, then served hot. Not what we’d call healthy in today’s world.

Unfortunately, it was this dish that taught me to love squash. It was cooked on my station.  I made a ton of this stuff every day, but I hadn’t thought of it in years.  Then the other night I was talking with my wife about old jobs we’d had and the memory of simple squash simmering in butter hit me like a brick.  I could smell it, I could taste it.  I had to have it, and nothing was going to get it out of my head until I made it.

Even though the memory of the original has a special place in my heart, I just can’t bring myself to use an entire stick of butter to cook two squash. I know better.  My cholesterol levels know better.  My family means more to me than that.  So I had to find a way to get the same flavor without all the fat.  I also had to keep it simple, because this side was never meant to be complex.

In the process, I needed a full meal to go with it, lest I sit and simply eat the entire pan of butter soaked veggies on my own, then be relegated to a diet of water and broccoli for the next month so that I can get my checkup without having the good doctor go insane.

In the end I decided on a combination of butter and olive oil and a bit of fresh red bell pepper to up the flavor that would be pulled out by the lack of fat.  The combination is wonderful and I highly recommend it the next time you’re looking for a simple side dish for a meal.

For the rest of the meal I added simply cooked turkey cutlets and an orzo and spinach salad that were both simply divine, if not paired perfectly. (serve the orzo on the side or in it’s own dish and you’ll be happier.  The squash and the Turkey are perfect together.)

Now that this trip down memory lane has reached an end, I feel invigorated and renewed.  Many of the things that I used to cook there are fresh in my memory and ready to be modernized, which is just the kick in the rear that my inner-chef has been lacking over the past few weeks.

Please give this dish a try and let all of us know what you think.  It’s dear to me in a strange way and I’d love to hear your thoughts.

I would have seasoned the orzo salad more aggressively.  using a bit of feta instead of the Romano might have worked better as well.  some capers could have upped the flavor a bit, too.