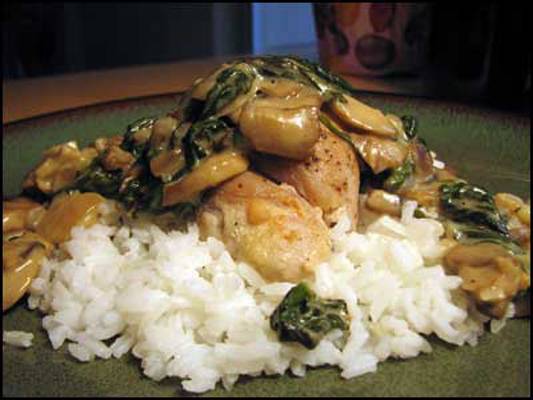 I think the inspiration for this originally came from Wolfgang Puck’s Cooking Class on Food TV some years ago, though it didn’t include a sauce. The recipe I remember was for stuffed chicken legs, though I can’t find the reference recipe on the Food Network site anywhere, so I may be mistaken as to the recipe.

No matter where the inspiration came from, I’m sure that I’ve deviated sufficiently from whatever the recipe was to call this a true Cooking by the seat of my Pants original. As a matter of fact, I changed gears at least three times during the preparation, adding a bit of this and eschewing that, so if this is in fact, based on any recipe by an award-winning chef, it has surely been bastardized enough that they would no longer recognize it.

It turned out to be simply incredible. Sumptuous, creamy, mushroom-and-garlicky goodness that fills the palette with multiple levels of wonderful flavors. I may have improvised at every turn, but apparently I did so in the right order, and with the right ingredients.

This is a multi-stage dish and is a bit more complicated than most of what I’ve presented here up until this point, even then it can still be made in a single pan if there’s enough time to lounge in the kitchen. (If you’re stressed for time, just make the sauce in a separate pan and you’ll be all set.)

It’s time for me to step forward and admit to something that I personally find a bit shameful, at least in the context of this blog. I actually made this meal and took most of the photos roughly a week ago. At the end of all of this, I realized that the photos of the finished product had been ruined by a bit of lint on the lens of my camera.

I should have noticed this at the time, but I was too busy eating and didn’t see the unfortunate results until there was nothing left to shoot. My only recourse was to make it again. (Oh, No! Not that!), so I’ve had a teensy bit of experience with it.

One thing to note, make sure that the side served with this dish is very low in acid. The first round I served with veggies in balsamic, which we both love on their own, but were horrible, horrible with the sauce. So on this round, I just gave in to the fact that there’s already enough veggies happening and went with plain rice, which is simple and complimented the chicken very well.

Having made my admission, the next time I make this (and I will, Oh, yes, I will!) I’ll probably add almonds to the filling, and definitely add some Marsala to the sauce.