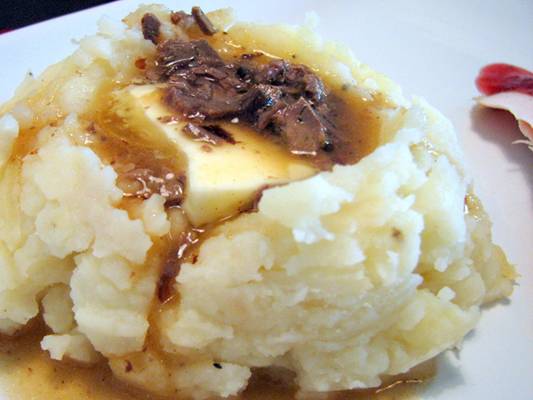 Yesterday I received a request through my wife for my mashed potato recipe. Honestly, I’d never thought to post it, because to me, it’s just one of those things that I make without thinking about it. I’ve been helping my mother make mashed spuds since I was six years old and I suppose I just assumed that everyone else had done the same. I really should know better by now, shouldn’t I?

As my wife kindly pointed out to me, there is a whole generation of people who grew up eating mashed potatoes primarily from a box or a tin. While I’ll admit to having used potato flakes, they simply don’t compare to the fresh alternative. (They do however, work wonderfully as a thickener in soups and stews, and are great at fixing a batch of fresh potatoes if too much liquid has been added, but that’s an entry for another time.)

Homemade mashed potatoes should not be daunting, nor are they complicated. The basic procedure is a simple 3 step process of boil, add flavorings and mash. Many of the more modern upscale recipes call for the use of a food mill or potato ricer. If you have either of these tools, by all means feel free to use them, but they aren’t strictly necessary. All you need is a mashing device. This can be a large fork or slotted spoon, a potato masher or a hand held mixer.

I’ll cover the basics here, then point out some additions and other tips at the end.

Amounts are not given for milk, butter or seasoning. this is because they greatly depend on the potatoes you are using. The older the potato, the more milk and butter you’ll need, there’s a little playing by ear involved here, but don’t worry!

It really doesn’t matter how you plate them. In a mound covered in gravy. In a serving bowl, family style or shaped to look like Devil’s Tower, they’re still going to be great.

I could go on, but I think the point is made. Mashed potatoes are incredibly versatile. Use your imagination, you’ll come up with a crowd-pleaser, I assure you!

I can’t mention the number of different things I’ve used mashed potatoes for over the years, and I’m not going to try. *grin*