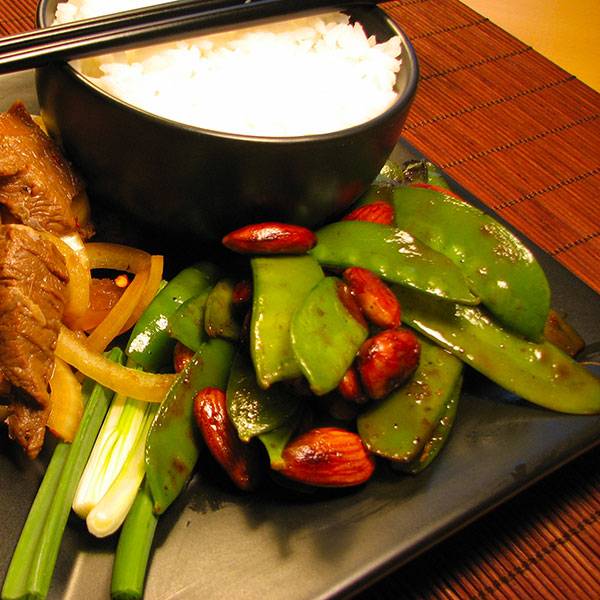 I’ve been craving snow peas since I saw a recipe for them on Simply Recipes about a week ago. At the time they were nowhere to be found in this neck of the woods and I was sure I’d have to settle for sugar snap peas instead. It wouldn’t be the same as those sweet, crisp snow peas I was after, but they would have to do… Or so I thought.

Thank goodness for the MegaMart.

I made a quick run yesterday to pick up a lamp for better low light photography and figured I’d grab some cilantro and green onions (scallions, spring onions or whatever you happen to call them) while I was there. Low and behold, right next to the tofu sat several luscious little packages of snow peas. (I guess in Texas they’re considered a health food… Who knew?)

I had to have them, I couldn’t help myself. So with two packages in the cart, I headed for the checkout and home to cook ’em up.

Perhaps it’s foolish that I’ve been obsessing over these little pods. I know it seems strange to me. The real reason that I wanted some is simple. Before last night it had been several months since I stir-fried anything and the urge for veggies that were neither steamed, boiled, baked or poached had been getting pretty strong.

This is a very simple and incredibly flavorful recipe and one I hope that you’ll enjoy.

I would have added a few sesame seeds. In fact, I was going to, but I haven’t cleaned out the spice cabinet yet and couldn’t find them behind or among all of the other junk I have in there.

Sigh… I need to get to that sometime this week

As an aside. In the photo, the peas look a bit greasy. They weren’t. That’s just a little drizzle of sesame oil for some serious sesame flavor.

How To: Turn a Whole Pork Loin Into 9 Full Meals & Save a Ton of Money212K Total Shares