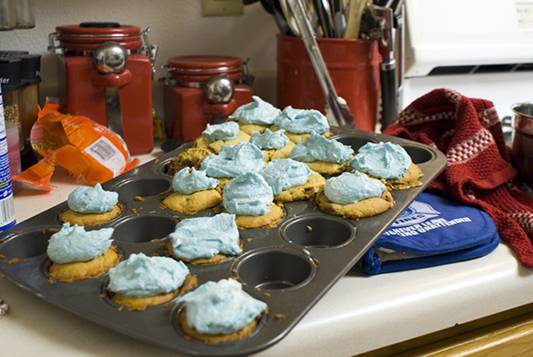 What do you get when you let two pre-teen boys and a lovely but slightly bored wife watch an episode of Cupcake Wars on TV?  In my house you get a group of extremely excited people talking about the different kinds of cupcakes that they could come up with if they were presented with the challenge.

The experience was almost as loud and boisterous as watching a football game.  My sons were on the edges of their seats, yelling at the contestants about ingredient choices, covering their eyes  and shouting “What was he thinking!” when one contestant mis-matched his icing for a particular cupcake and groaning when another stated that all of hers had to be “completely allergen free and vegan.”

At the end of it all, My oldest son simply looked over at my wife and said. “I want to make my own cupcakes.  they would be better than any of those nasty things.”

And so it had begun. 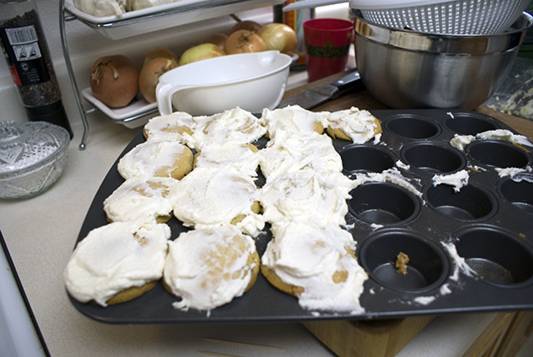 The very next afternoon the chaos ensued.  Both boys wanted to make their own variety of cupcakes.  Hours were spent deciding on a base flavor. Chocolate, vanilla and any type of fruit or berry were eliminated one-by-one until only peanut butter remained.  with that set, my wife found a doable recipe for scratch-made batter (because if you’re going to teach a kid to bake, you don’t use a box) and they all set off for the kitchen, notebooks in hand.

From this point on my knowledge of the project is a bit hazy.  I was banned from the kitchen for the remainder of the process.  something I can’t say that I’m sorry about, or at least I wasn’t at the time.  I was only allowed back in to assist with the white chocolate butter cream frosting, which I will not detail here because it was quite frankly too sickly sweet to eat, even for a four year old.

So where are the gorgeous cupcake shots?  Where are the carefully arranged displays and perfectly lit examples of the toils of my kids?

I really didn’t have any place left to shoot them. 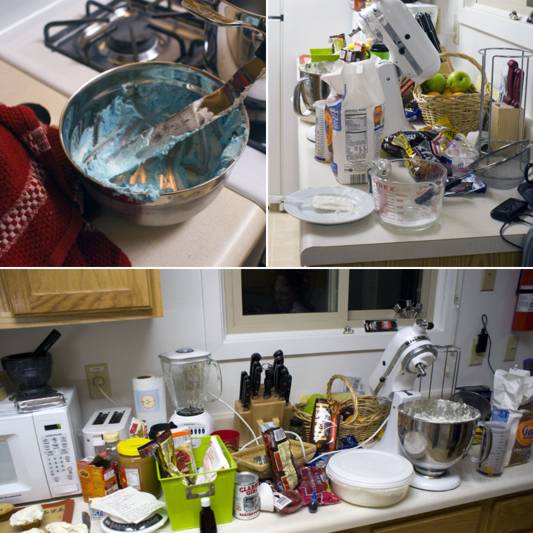 Not only was the kitchen in a state that prohibited a nice staged shot, but the boys had decided to frost the cupcakes while they were still in the tins, which made getting them out a bit of an issue.  They were in a hurry, you see, to try the little gems that they had made.

And they were good.  Very good.

The basic cupcake recipe makes a nice, semi-firm peanut butter cupcake.  It’s not too heavy, not too aggressive and an absolute treat to munch.  The kids’ additions took that well over he top.

My oldest added a peanut butter cup to each cupcake as a little surprise.  The result was phenomenal and gave that little bit of chocolate that all great peanut butter pastries needs to be complete.  It was a great idea and executed well.

His younger brother opted for a more aggressive flavor addition. Heath® Bar toffee crumbles.  it may just be the fact that I am a complete toffee whore, but for me those were perfect.  Of course I had to sample one or five before I could come to that decision.

Regardless, it was a crazy fun night, the kids had a blast and the cupcakes were very good.  Better because they were made with an extreme amount of excitement by very eager hands and devoured just as enthusiastically.

Give these a try and let us know what you think. I’m sure you’ll enjoy them as much as we did.

Maybe I’ll work on the whole “clean as you go” mantra with the kids.  It might help make cleanup a bit less devastating.  Other than that, we’ll all be in the kitchen again today, because cooking with your kids is awesome and it teaches them a great set of skills.