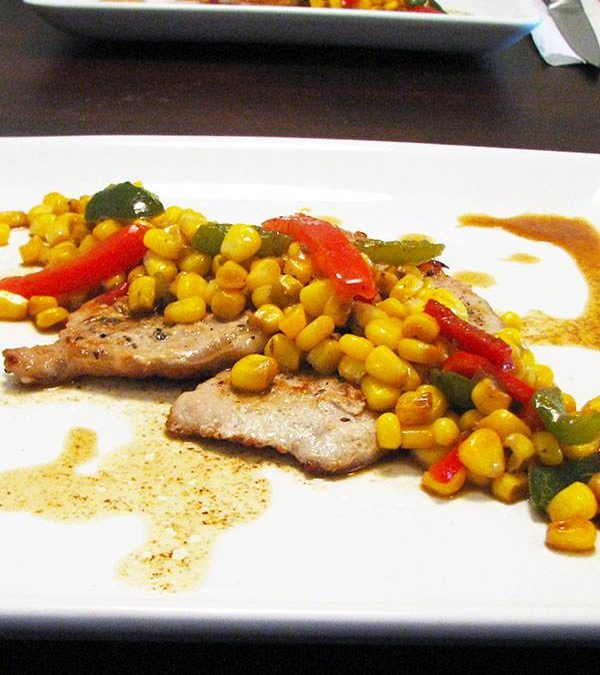 What does a foodie make for lunch? Perhaps a better way to phrase that question is to ask what a foodie who generally hits the kitchen with no idea what he’s about to make cooks for lunch, because when I threw this together I had absolutely no concept of what I was going to do with what I had, just that I needed lunch on the table in under 30 minutes and I wanted it to be a fairly light meal. The result was, as are most truly inspired culinary moments, sublime. In the end the dish was light, slightly spicy and just enough for two (with the addition of a little bread to sop up the leftover juices).

Why chutney you ask? To be honest, I had no idea that I’d made a chutney until I looked it up this morning. For me the process went more like this:

It’s those “AHA” moments that make cooking a joy for me. They are the culmination of the methods I’ve learned, the flavor combinations I’ve tried and the skills acquired in my 20-plus years of cooking. Sometimes it works, sometimes it doesn’t. This time it was a resounding success, and in the process I discovered something.

Chutney isn’t necessarily all that exotic.

That may strike some of my more experienced foodie friends as quite humorous. Chutney, by definition, isn’t complicated stuff at all. The fact is, I’ve always thought of chutney as some exotic concoction that only classically trained chefs whip out on anything like a regular basis. I also never realized that I’ve been putting them together for over a decade without ever knowing that was what I was doing.

To Quote CooksOnline.com, Chutney is simply:

A sauce or relish containing fruits, spices and herbs.

Hmmm. Been there, done that. And they’re good!

So why, you may ask, didn’t I just write this up as an entry on how to make chutney? Well, the simple fact of the matter is that this particular variant requires a pan that’s had pork seared in it. It just wouldn’t be right without it. So I’m suggesting this as a substitute for the apple sauce that so many people seem to slather on their poor lil’ unsuspecting chops.

But enough of this dissertation… On with the food!

I didn’t quite get the chops right this round. The pan wasn’t hot enough and I had to cook them a bit too long, which makes a thin cut chop like this a bit tough. Next time I’ll let the pan warm a bit more first. Other than that, this was fantastic, and I’d be happy to make something like it again.