For the second installment of Project Food Blog, the folks at FoodBuzz asked that we step outside our comfort zones and create a dish from a cuisine that we were unfamiliar with.  What’s more, we had to keep it authentic. I chose to recreate a Turkish recipe called Domatesli Karides Sote, (or sauteed shrimp with tomatoes).  The problem for me is that I’m pretty comfortable with many cuisines and that I had to make the dish with what I had on hand, as we’re slated to move soon.

As far as stepping outside my comfort zone, I did so by following a recipe to the letter.  In my book, that’s about as far outside the zone as I can get.  I swear that I only adapted the recipe by using canned tomatoes instead of fresh, and dried basil instead of fresh basil.  For me cooking without interpretation is almost painful, but the result was worth it.

Cooking cuisines from other cultures can teach you many things.  Things that join all human beings together in small, every day ways. 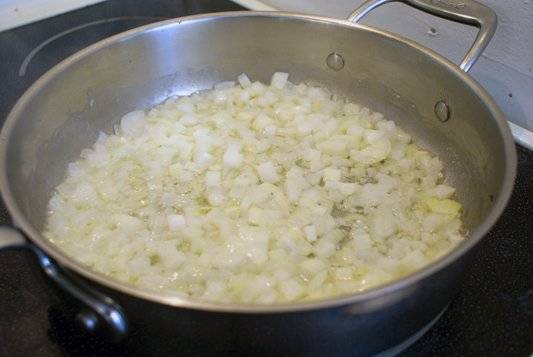 Within minutes of starting, the house was full of the aromas of onions cooking in butter and crushed garlic.  These scents mingled with the briny smell of the sea, chopped parsley and bay leaf.  the combinations might not have been what I’m used to, but they were comforting and soothing on a very universal level. 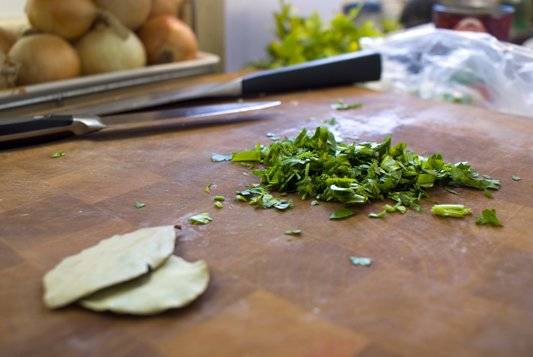 The end result was, as most Mediterranean dishes, including sauteed shrimp with tomatoes are, far more than the sum of its parts.  What seemed to be a very tame recipe was hiding a hidden blast of flavor in the whole peppercorns added to the sauce.  The method for cooking the shrimp cooks it to perfection, even if you accidentally leave it on a bit too long. (Or have to leave the skillet sitting on the stove while you shoot pictures of the dish.)

As to the authenticity, I got the original recipe from Binnur’s Turkish Cookbook, the most authentic source of Turkish recipes that I know of, and one that my wife swears by. (And if anyone should know what Turkish food tastes like, it’s a lady who has lived there for over a year.)  I strongly suggest this recipe to anyone who loves shrimp.  It’s simply amazing.

And remember, your votes count in this competition.  Voting opens tomorrow, so hop over to my contestants profile and give me a nudge towards challenge #3 if you think the recipe is deserving!

Domatesli Karides Sote, or sauteed shrimp with tomatoes, is a surprisingly light, easy to make Turkish dish that's sure to wow your friends and family.

I think I would have crushed the peppercorns instead of leaving them whole.  Biting into a whole peppercorn is a bit aggressive, but the blast of flavor is nice.  Big chunks, yes.  Whole corns… Not so much.