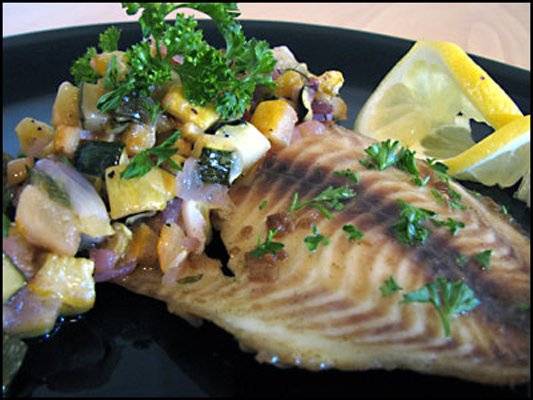 In my opinion, fish is best cooked simply. Flavors should be added sparingly so that the delicate flavor of the meat comes through as its own statement, rather than being buried in herbs and spices or some overwhelming sauce. That doesn’t mean that fish should be boring, and this dish is anything but.

Tilapia is described as a mild flavored, medium textured fish, but I find the flavor to be much closer to moderate than mild, especially when baked, which seems to deepen the flavor considerably. It’s also one of those fish that people either love or hate. I used to be one of the latter crowd, but I find that as time goes on I like the texture (and price!) a lot more. Perhaps it’s an acquired taste, or my tastes are simply changing as I approach the big Four-Oh, either way, tilapia is something that will find its way onto my plate quite a bit more often.

The inspiration for this particular dish was simple necessity. I had a bunch of summer squash I’d bought for a barbecue that never happened and I needed to cook at least some of them up before they went too far south. The light flavors of the zucchini and yellow squash seemed like they’d be a good compliment to the tilapia I’d bought the week before, and with a few other small editions, such as a bit of garlic infused olive oil, I could have it all done in jut a few minutes, which sounded good as well.

What I would have done differently had I thought of it at the Time:

I’m not sure, really. This dish was wonderful in its own right, but so many things came to mind while I was making it that I’m sure I’ll be doing variations on the theme in the future. Fish lends itself well to other mild flavors, or citrus if used sparingly, so the thought of an orange or ginger glaze is nudging around the back of my mind as an excellent combination.

Then of course we have salads. I think Tilapia, especially if smoked, might be wonderful as part of an updated Cobb Salad, especially if a mild goat cheese or perhaps a mild jack cheese was used.

I’ll be delving more into the world of fish and seafood as the year goes on, and we’ll see how many winners I can get out of the mix. To be honest, it’s been years since I made a lot of fish, mostly because my ex-wife detested all forms of seafood, so its a very refreshing change.