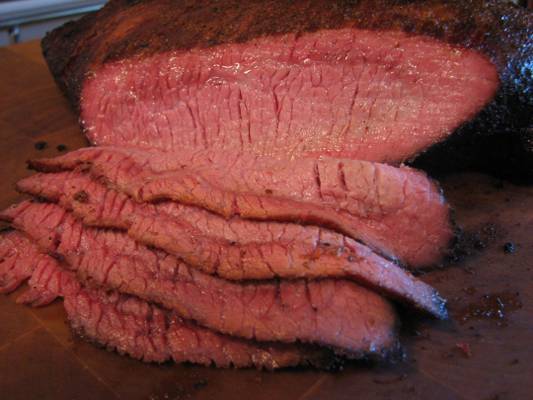 I’m dedicating this post to Lydia of the Perfect Pantry, who requested brisket the last time I did barbecue, and every expatriate Texan out there, including of course the lovely Lisa from the Homesick Texan. I wish you could have been here to enjoy with us!

The food blogger rouses himself from a quiet and peaceful slumber and staggers to the coffee maker. He realizes he had planned to wake at 5:30, so the infernal machine hasn’t started brewing yet. He punches the start button and plops down at his desk to check the night’s emails until brewing is done.

The food blogger is roused from a quick nap by the beeping of the coffee maker. It seems he has fallen asleep at the keyboard again. One cup of high octane sludge later, he is ready to proceed with the day as planned.

The blogger pours himself another cup, adds a bit of sugar (which he had forgotten on the first round but had been too tired to correct) and inspects the contents of his refrigerator. Inside he finds a 3.4 pound pork butt roast and a 2.8 pound brisket which have been resting happily throughout the night after their evening massage in BBQ spice rub. they look content and are moved to the stove top to come to room temperature while the food blogger continues.

The food blogger lights a small pile of briquettes in the fire box of his combination smoker/grill and makes sure that the mesquite wood chips are nearby, opened and present in sufficient quantity. With the fire happily started, the food blogger enjoys the sounds of pre-dawn morning while sipping happily on the remnants of his second cup of coffee.

With the coals now colored a lovely gray and glowing warmly in the smoker box, the food blogger gets down to business. A few quick photos of the ingredients are snapped, another cup of coffee is poured and the dog is let out on his tether. (can’t control his schedule, he needed to go). The blogger, the coffee and the two marinated pieces of USDA choice head outside to begin their long, slow day.

The meat is placed on the grill as far away from the fire box as possible, a probe thermometer is laid on the grate next to the meat to ensure that the grill’s built-in analog thermometer isn’t lying and the lid is closed, not to be opened for somewhere around four hours.

Mesquite chips are added to the charcoal for smoke, first some smaller pieces then, once those have caught fire, a few hand-sized chunks get plopped on. The fire box door is closed and the vents on the smoker are set to half-open. The food blogger wanders back ito the house to see about other projects for a bit.

The food blogger turned pit-master checks the temperature in the smoker box and inspects the fire. unsatisfied with the amount of smoke present, he adds a few more pieces of mesquite to the fire box. with the smoker box temperature hovering between 150 degrees and 200 degrees Fahrenheit, the food blogger retreats to a 20 minute timed run at Resident Evil 4, which is still kicking his buttocks.

O.K., Enough with the campy Play-By-Play!

There really is no “recipe” for a traditional barbecue (which is technically just a hot-smoking process.) It all depends on how smoky you want it, how tender you’d like your meat and your own personal preferences for the final product. The only way to know the best way for you to do this is to get out and do it.

I prefer charcoal and wood over gas for traditional barbecue, but it is possible to achieve similar results on a propane powered setup. How you set up your grill is important. 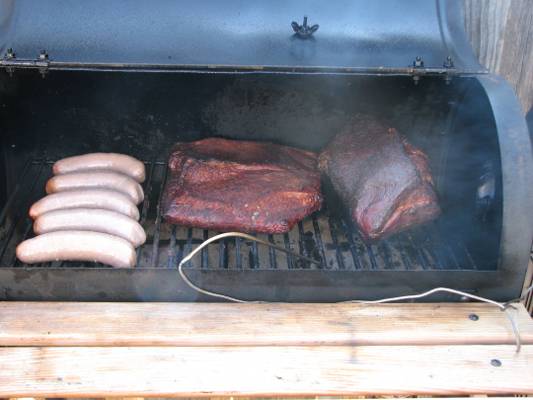 The rest of the cooking time goes in 20 minute intervals. The fire must be checked for both heat and smoke output and vents adjusted constantly so that the temperature inside the smoker never goes under 114 degrees Fahrenheit or over 200 degrees Fahrenheit. Under 114 and you have the possibility of bacteria growth… Over 200 and you’re cooking things too quickly. In my particular smoker set-up, I find that 125 to 150 degrees Fahrenheit is ideal for my needs. (note that for larger cuts of meat, you’ll want to lower the temp and lengthen the cooking time, sometimes up to 24 hours, and that in my smoker the temperature is read at the top, not at the level that things are being smoked, which is why I rely on a probe thermometer.)

At the end of the process the internal temperature of the meat should be at least 145 degrees, and should have been at that temperature for a while. You want to use meats with a lot of connective tissue or muscle fiber, such as brisket, flank or ribs. The long cooking time will break down the connective tissues in the meat, transforming it into gelatin by the end of the cooking process and leaving you with a tender, moist and completely delicious piece of meat in the end. (You may also happily smoke a few jalapenos or other chili peppers at the same time you’re smoking your meat.)

Pork will still be slightly pinkish, but don’t let that scare you. (If you’re going for pulled pork, keep the temperature at about 200 for the last four hours of cooking, or allow to cook a full three hours longer.) 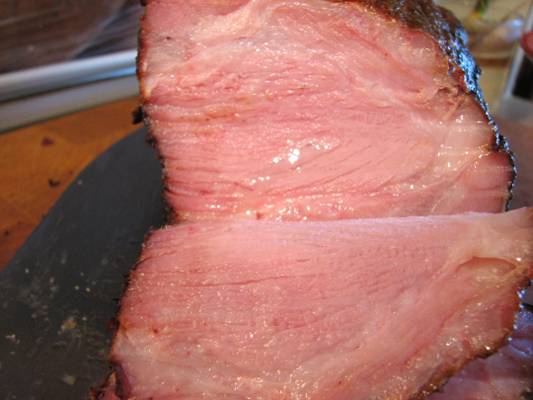 The sausages were added 2 hours before the estimated completion of the rest of the cuts on the rack, which would have been perfect for a beef or pork based sausage, I think that the turkey sausage I used should have gone in three of four hours before time to pull. I’ll keep that in mind next time. 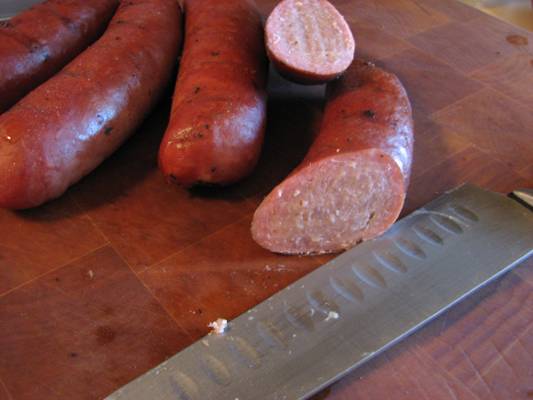 Some people prefer to use what is called a wash, though I prefer to simply add a container of water to the smoker to keep humidity levels up. A Texas style wash is almost always a beer-based marinade that swabbed over the meat every 20 minutes or so for the entire process. I don’t think a wash necessarily adds anything except a lot more work, and adding 12 oz of water or beer to steam while your meat smokes still achieves a very tender end product.

The sign of great Southern style barbecue is the smoke ring. The smoke ring is the outer layer of the meat that has been penetrated by the smoking process, and is what lends this style of barbecue its particular flavor and characteristics. In general, the deeper the smoke ring penetrates into the meat, the better the barbecue. 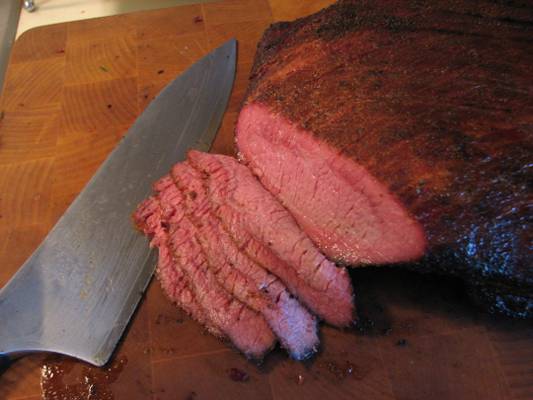 To sauce, or not to sauce?

Personally, unless I’m going for Kansas City Style barbecue, I would never dream of using any sauce at all. This is a personal preference however, and is not shared by all Texans or barbecue fans anywhere. I would suggest that barbecue done right requires no sauce. I do have it available on the side for those who disagree, but I always ask them to try it without condiments first. Most forgo the sauce once they’ve given it a shot.

(Note: In North Texas, sauce is almost always served on the side. In central Texas, many BBQ houses have signs that read “No Sauce needed or available. We just like a good barbecued brisket around here.)