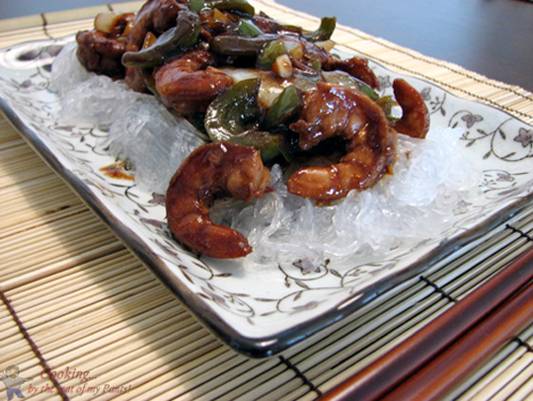 My love affair with shrimp is legendary. It began when I was just a kid and ordered something called “prawns” at the local A&W. (these were not, in fact, prawns; just jumbo shrimp. We Americans seem to have an issue with the distinction.) At that time in my life, it was something new, exotic, and completely different from anything I’d previously experienced. It was before I’d had crayfish, or salmon, or lobster. I was a seafood virgin then, but one taste of those little breaded and fried crustaceans was enough. I was hooked, and there was no turning back.

I have since learned that shrimp is far more versatile than I ever could have imagined at the time. It’s flavor can go from savory to sweet, it plays well with others, and it’s a breeze to prepare, especially if bought frozen and peeled. Simply take the number of shrimp you want, place in a bowl and run under cold water for three to five minutes and they’re ready to go. No fuss, no muss, just pat dry and get to cooking!

This dish was created in true Seat of my Pants style. All I knew for certain when I started was the I wanted to use cellophane noodles, and that I wanted a stir fry. The rest I just came up with as I went along. The result… Spicy, sweet and satisfying. The shrimp could be used as an appetizer by themselves if you wish, I just really wanted those noodles!

This came out an awful lot spicier than I was expecting, due to the age of my garlic chili sauce. It’s good to remember that once opened, these things tend to gain a lot of heat over time. I also think I would have preferred green onions over the white, but i wasn’t thinking and just started chopping away before I realized I had some in the fridge. Green onion tips cut in about 1-inch pieces are very chopstick friendly morsels, and work well whether you are using them or not.

For the sake of these photos I placed the sauce and meat over the veggies, but I would suggest tossing the noodles in with the sauce before serving, it makes everything a tad easier to eat.