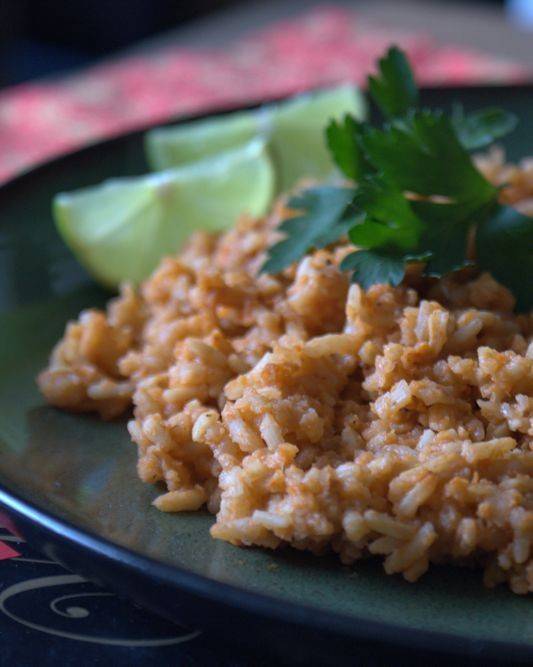 Lisa Fain may have just saved me from ever setting foot in another over hyped super-chain Tex-Mex restaurant. If you don’t know who Lisa is by name, I’m sure you’re already familiar with her blog, The Homesick Texan or her cookbook, The Homesick Texan Cookbook

; which I will be reviewing in the next few days.

But how did Lisa save me from another mediocre enchilada plate or cheese-sauce covered nightmare? She did it by teaching me the secret of restaurant-style Mexican rice (also called Red Chile Rice and often Spanish rice), which is the one of the primary reasons my wife craves Mexican and Tex-Mex foods. (The other being refried beans, but I’ve had those down to a science for years.) 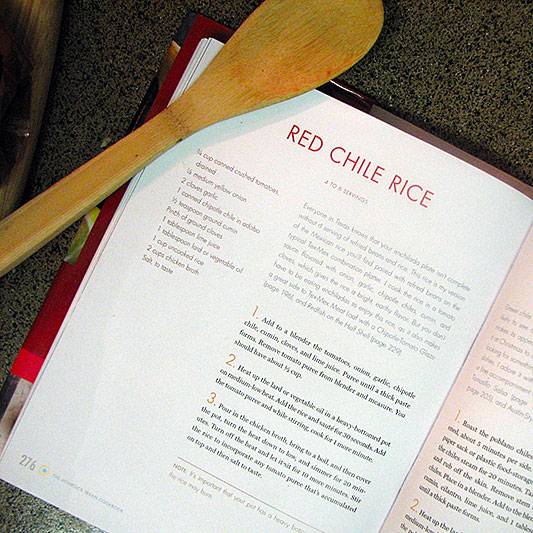 I’ve been trying to perfect a Mexican rice recipe for years, but have always fallen just a bit short of recreating the dish my wife loves so much. My versions, while good, just didn’t quite match the taste of the rice you get in a restaurant. Any restaurant, be it small or a massive chain.

I was missing something.

I banged my head off the desk for a minute. I develop recipes. I should have known that cloves were involved. I should have smelled them, tasted them, known they were there by the telltale tingle on the tongue. Cloves are something that can’t be hidden, right? Right?

In this  dish the cloves are a subtle, yet crucial ingredient. They are that playful something in the background, lifting the tomatoes and peppers to a higher level. They are what makes this the same thing that you get in your favorite Tex-Mex restaurant. Without them you have good rice. With them you have amazing, perfect, beautiful rice.

Lisa calls for the use of chipotle in adobo, which can’t be used in our house due to my wife’s allergy to capsaicin. I can use chipotle sauce and adjust heat as needed so that it won’t trigger an allergic reaction, so I did. I also used a little bit more lime juice than Lisa called for, and garnished the whole thing with cilantro.

Aside from these small changes, this recipe is Lisa Fain’s. She deserves credit. In my opinion, she deserves a medal and an award show with a standing ovation. She deserves a day in her honor, complete with marching bands and hometown parade floats. And ice cream, lots of it.

She nailed this one.

Thank you Lisa. You’ve helped me to mark one more of my “must learn” recipes off the list. My entire family (with the exception of the super-picky 5 year-old) thoroughly enjoyed every last bite. The next time my wife craves refried beans and rice, I have it covered, and I owe it all to you.

A quick and easy recipe for restaurant style Mexican rice, Adapted from a recipe in The Homesick Texan Cookbook by Lisa Fain.

I’m sure that later down the road I’ll change this up a bit, but for now I’m fine with this recipe as-is. It’s amazing.