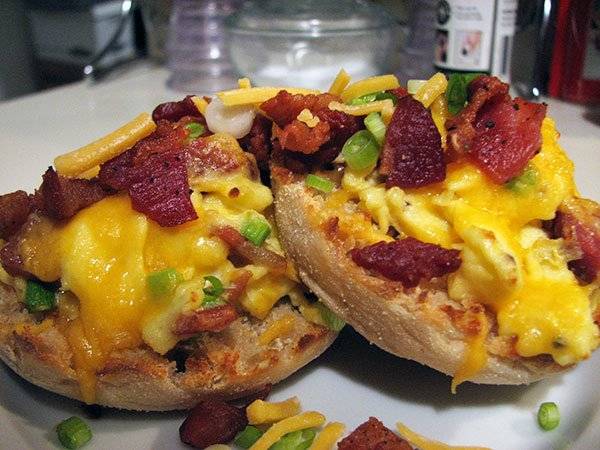 Who said breakfast had to be predictable? Just because you’re in the mood for breakfast ingredients such as bacon and eggs doesn’t mean that they should be served in the classic manner. This little gem of a breakfast idea shares the same basic ingredients found in fast food breakfast sandwiches served in paper wrappers across the country, but the resemblance ends there. It is served open faced with crispy bacon, scallions and sharp cheddar on an oven crisped English muffin, and is far better suited to eating with a fork than as a hand-held item.

If your mind is flashing to soggy English muffins, overworked eggs and processed cheese, be heartened, this dish contains none of those things. The muffins are crisp, crunchy and browned to perfection, the perfect compliment to fluffy eggs, a hint of scallion and crisp bacon. the cheddar brings it all together into something that is somehow more than the sum of its parts in some subtle way sure I can describe.

Honestly, nothing. I was originally going to try for a sauce of some kind, but by making sure the eggs weren’t hard set, it was unnecessary.