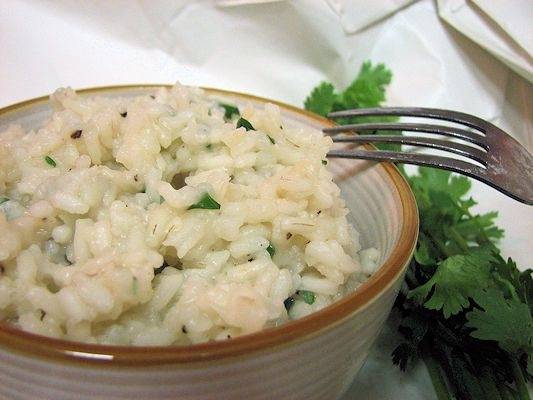 If you’re looking for a simple, succulent, silky addition to any meal, this is it. A true classic from Dallas, TX, originally chronicled in The Great American Cookbook, by Clementine Paddleford

. This is my take on Mrs. A. L. DeGuire’s chicken pilaf, a truly gorgeous dish.

While some may argue that pilaf is not an American creation, this recipe comes from A Texan family of mixed French, Armenian and Greek descent. Both second-generation Americans. This recipe, like most American dishes, is an adaptation from their family heritage. We are, after all, a country of mixed cultures. Chicken pilaf is a perfect example of the mix of influences that makes our cuisine, well, ours.

Preparation in this case is extremely simple. At its core this is simply rice steamed in chicken broth with a touch of lemon juice and butter. The addition of cilantro was ours, because we had a bunch of it to use up, and because my family adores it. It adds just a bit more flavor and adds a pop of color to the rice..

While this could probably be prepared in a rice cooker as well, I wouldn’t recommend doing so. The recipe calls for a few initial stirs on the rice, and those few minutes of stirring are what gives this dish its remarkably silky texture. You aren’t going to get that silkiness in a rice cooker. Also, if you happen to have some fresh chicken broth on hand, the experience will be that much more sublime.

This chicken pilaf recipe is a creamy, luscious taste of Texas. Adapted from a recipe originally printed in The Great American Cookbook - 500 Time tested recipes from every state, by Clementine Paddleford, a cookbook I highly recommend.