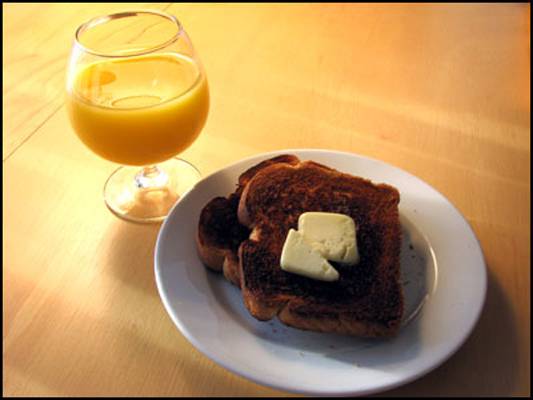 Now that you’re all done giving the title and photo a double-take and asking yourself “did he really write that?”, I’ll clarify.

You read the title correctly. Monday night found me hit hard with a sudden case of stomach flu. After several quite distressing moments and over 14 hours sleep, I finally managed to send my wife off to the store for the one thing I knew would help me get back on my feet. Bread, lots of it, for burned (Or Burnt, if you’re from my neck of the woods) toast, and Orange Juice.

I know that it’s a strange combination. I know that there are those of you who have never, and would never consider this. But when I’ve got tummy-troubles, it’s the first place I turn.

My Grandfather swore by this combination when he felt under the weather. He most likely brought the idea with him from Arkansas in during the dust bowl, though I could be mistaken on that. My mother swore by it as well, and dished it up to my sister and myself when we had bouts of nastiness as children. I’ll admit that I turned my nose up at the idea as a kid, but I choked it down dutifully.

The combination has benefits. The char on the toast settles the stomach (It is just carbon,after all) and helps clear your throat. The butter on the toast then coats, which is nice if you’ve had a night like I did, and the orange juice packs all the vitamin C you could need. And, in the very unpleasant situation that your stomach just wasn’t ready for it… Well, let’s just say it makes life less challenging in those moments.

For me, it has the added benefit of carrying a bit of the warm feelings my mother used to dish out liberally when I found myself shivering and helpless as a kid. Though she can’t be here today, she’s here in memory telling me that this will pass, and that everything will be better tomorrow.

Later in the day, this will probably turn itself to toast with peanut butter for some added protein and substance. For now though, I’m managing to stumble about the house slowly putting things back in place and beginning the cleanup job that’s always entailed when I’m out of action for any length of time.

For some reason, no matter how many times I tell the kitchen to clean itself, it just can’t be bothered, and I end up having to tackle the job myself.

Remind me tomorrow that I need to hire an obedience trainer for that, will ya?