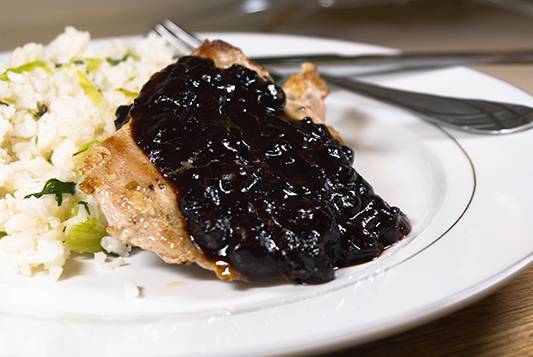 “Our greatest glory is not in never falling, but in rising every time we fall.” – Confucius

Sometimes the dish you intend to make fails you.  The best of intentions, the best execution and your most creative thoughts serve only to create something that is totally, utterly inedible.  It happens to all of us from time to time. The thing is though, if you really examine that failure you’re almost sure to find something inspired in it.

This recipe stems directly from what can only be described as an epic failure.  It was to be a component in a dish that had a requisite list of ingredients that didn’t play well together. I failed those ingredients.  The resulting meal was awful, but this sauce was sublime.

“Just because something doesn’t do what you planned it to do doesn’t mean it’s useless.” – Thomas Edison

It wasn’t right at all for the original dish, but then so much of that was wrong.  It is however, the perfect foil for pork or chicken.  The flavor is robust, but not as sweet as you would imagine.  In fact, I’d wager a guess that the flavor is absolutely unlike what you would imagine if you have not tried it.

I expected a sweet, cloying and very much blueberry tasting sauce.  What I got was a blast of blueberry laced Umami. Yes, the blueberries were there, but everything about this sauce is savory. The sweet of the berries hides in the background.  It teases your palate and plays with your senses rather than attacking them.  It was an instant hit and one that I’m sure you’ll love as much as our family did.

The dish I planned originally was horrid, but this sauce was a part of that failure.  In that failure I found a success that is now a family favorite. Sometimes failure is good.  We learn from it and we grow, you know?

The next time something goes wrong in your kitchen, look for what went right instead of dwelling on the negatives.  Chances are that among the burnt, the curdled, the blackened or over spiced you’ll find something amazing.

It’s there if you look for it.

It’s our first time with this recipe, so we’ll definitely tweak it around a bit in the future, but for the most part I’m loving it.  My middle kiddo doesn’t prefer whole blueberries in the sauce, so I may try a strained version next.