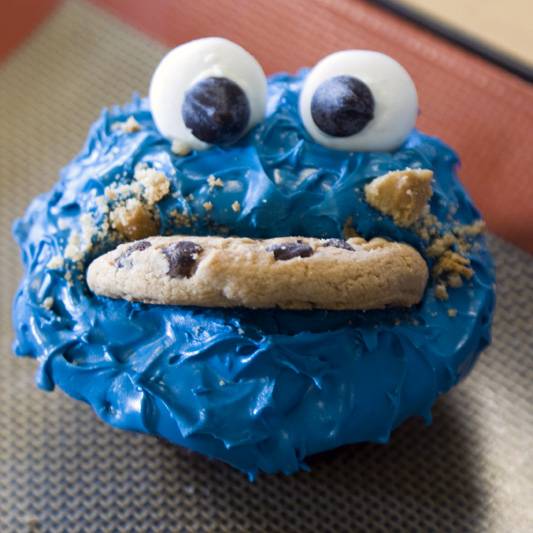 If you have been alive since 1969 and, by some chance, were ever a child watching television, you’ve probably stumbled across Sesame Street. If so, you’ve no doubt met up with another one of my culinary heroes, the Cookie Monster.

Cookie (as he is called by his closer friends, though it’s widely rumored that his name is actually Sid) is probably the most fanatic foodie of all time.  His legendary addiction to cookies is culinary history, eventually leading him to describe himself as “the Robert Downey Jr. of cookies.”

Though now on the road to recovery, Cookie’s exploits have made him a foodie icon.  His unabashed love for all things cookie have inspired a generation, and while we commend him on his recovery he will always be best remembered for his “crazy times during the ’70s and ’80s.”

Cookie single-handedly coined the phrase “Nom nom nom!”, generally through a mouth filled with cookies. This alone elevates him to a status on par with other foodie language changers such as Rachael Ray and Sandra Lee, though we think Cookie not only did it first, but did it better.

This project is an homage to those crazy days. Those days when he was most often found with a cookie in both hands, eyes glazed over and jittery from an uncontrolled sugar high. This is the Cookie Monster that we all know and love, but immortalized in both cake and cookie…

This is not a complicated project but it yields amazing results.  If you have an hour or so to spend, you can delight both the young and old in your family.

Start off by whipping up a batch of cupcakes. Use your favorite recipe or your favorite mix.  You don’t need to get fancy, you just need cupcakes to work with.  We went with some double-chocolate goodness that was in the pantry. 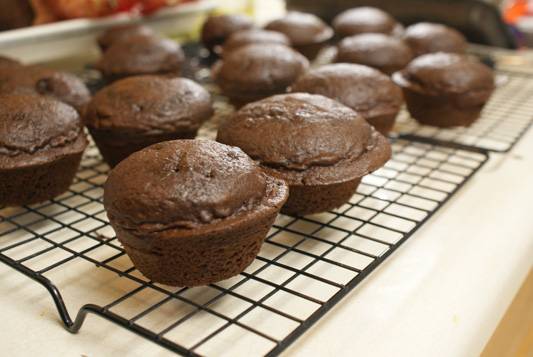 Once those are done and cooling, mix up your frosting.  Believe it or not, it takes quite a bit of food coloring to achieve a true Cookie Monster blue.  Just keep going until you have something like what’s pictured below. (The blue sugar is optional, but simple. Just add a few drops of food coloring to granulated sugar and mix well.)

While you’re at this step, you might as well attach some chocolate chips to your Mentos with some of the uncolored frosting.  These will be cookie monster’s eyes. 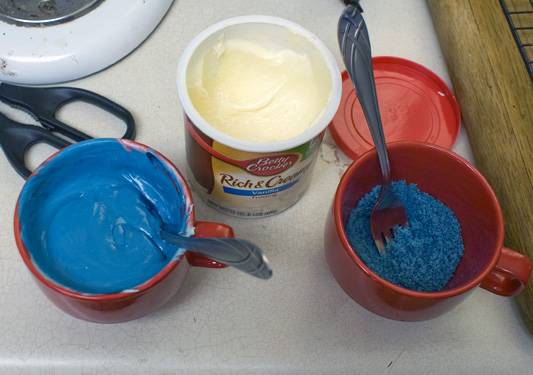 Once The cupcakes have cooled, plop a healthy dollop of blue frosting over the top and spread it evenly.  Dab at the frosting using the back of a fork to form Cookie’s “fur.” This is the trickiest part, so feel free to experiment. Basically you just set the fork onto the frosting and pull it away, the frosting should follow.

Next, attach the eyes and stuff a cookie into the place where you want to see Cookie Monster’s mouth.  You should end up with something vaguely like this: 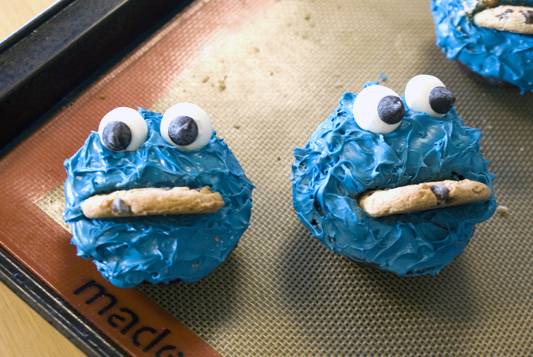 Cute, isn’t he?  he even has little Cookie Monster pals to play with.  At least he does for a few minutes.

Unfortunately for your new little Cookie Monsters, they have a natural predator.  A predator so fierce and unbridled that even the Cookie of old doesn’t stand a chance against it.  This predator is swift, cunning and ever on the lookout for any sign of cookie-munching weakness. 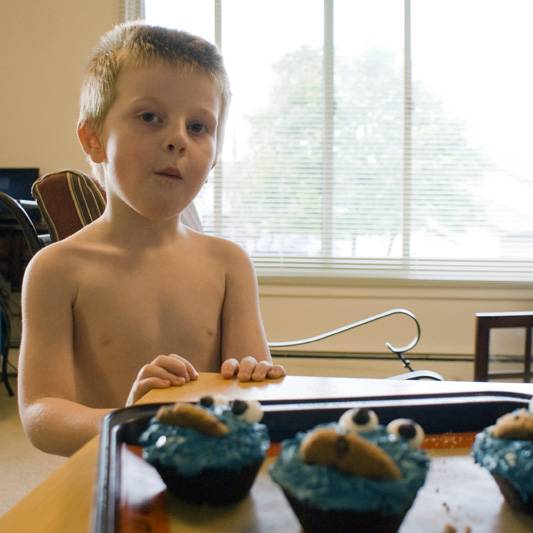 In the end, this is a fun little project that you can whip together quickly.  The kids can help, but the appeal isn’t limited to youngsters alone.  Anyone who ever sang along to “C is for Cookie” is going to love these adorable blue treats.

The best part is that you can just have fun with these.  My favorite of the bunch was formed of mishap.  As a matter of fact, the poor guy fell to the floor in a sugar-induced haze.  Yet his appeal is still timeless: 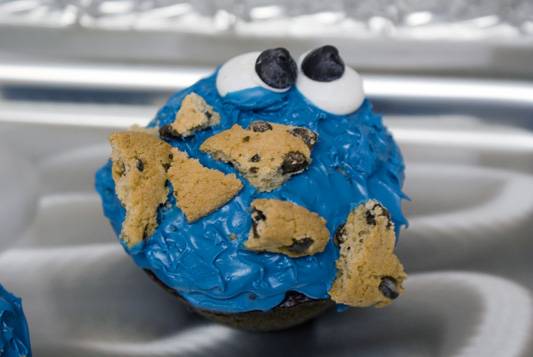 And that’s it for this installment folks.  I hope you enjoyed our homage to the wildest cookie eating rebel who ever graced the earth. I know we did.